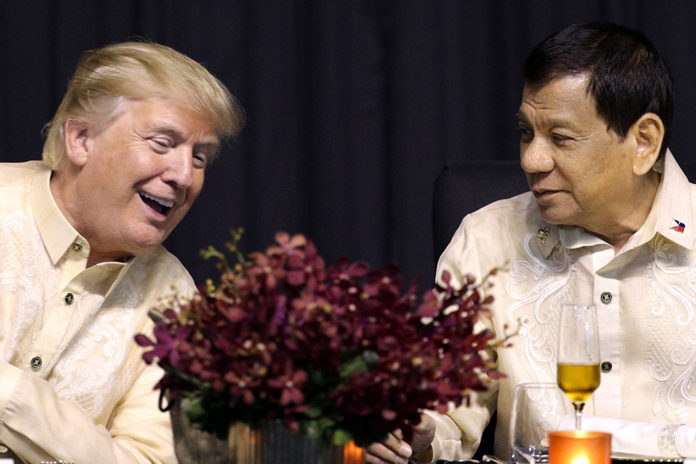 President Trump had a bizarre meeting with Philippine President Rodrigo Duterte on Monday in which he avoided asking any questions about the country’s human rights abuses.

Thousands of people have been murdered since Duterte launched his war on drugs. He has denied hiring vigilantes to carry out a campaign of extrajudicial killings. Human rights groups have repeatedly denounced these killings.

Reporters questioned Trump on whether he’d press Duterte on human rights. He ignored those questions. Duterte attacked reporters who asked about his human rights abuses.

“Whoa, whoa. This is not a press statement. This is a bilateral meeting. We will be discussing matters that are of interest to both the Philippines and…with you around, guys, you are the spies.”

Trump responded with a chuckle.

Our president has worked to keep a “warm rapport” with Duterte, who previously referred to Barack Obama as a “son of a b—-ch” and bragged about murdering people.

“President Trump specifically said he has always been a friend of the Duterte administration, unlike the previous administrations of the United States.” – Duterte spokesman Harry Roque.

There are conflicting accounts as to whether Trump brought up human rights during the conversation at all.

According to White House press secretary Sarah Huckabee Sanders, “Human rights briefly came up in the context of the Philippines’ fight against illegal drugs.”

Roque said, however, that “The issue of human rights did not arise, it was not brought up.”

Although Trump would not discuss human rights when reporters asked, he did have quite a lot to say about the weather.

“I’ve enjoyed being here. The weather is always good. Today it’s pretty good. But one thing about the Philippines: eventually it gets good no matter what.”

He noted that he and Duterte have a “great relationship.”

Why might Trump be so reluctant to reprimand Duterte for allegedly ordering the murders of thousands of constituents who have nothing to do with the narcotics trade?

First of all, Trump is hoping to maintain a relationship with the Philippines to gain leverage in halting China’s expansionism in the South China Sea. The Philippines has clashed with China over disputed reefs and shoals that the countries share. Trump has offered to “mediate or arbitrate” such disagreements.

The real answer, however, seems to be a massive conflict of interest. According to The New York Times, among those in a private meeting was Jose E. B. Antonio, a developer who is Trump’s partner on a $150 million, 57-story luxury tower in Manila’s financial district.

I guess by “drain the swamp” Trump meant “remove any and all integrity”.