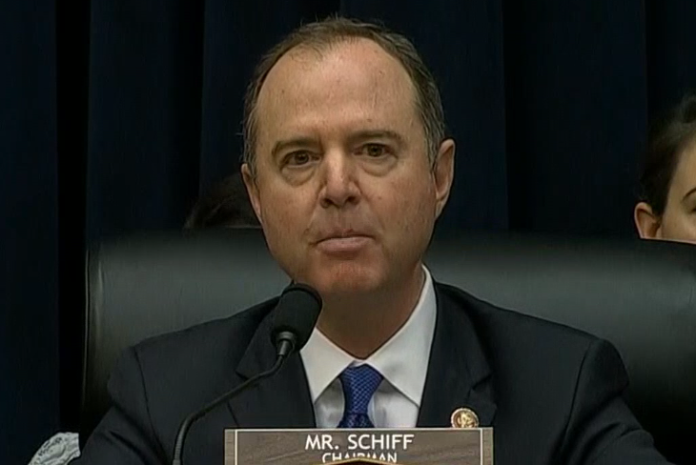 Rep. Adam Schiff (D-Calif.) shamed his Republican colleagues on the House Intelligence Committee on Thursday for calling on him to resign in response to a tweet from President Donald Trump.

Trump accused Schiff of “unlawfully lying and leaking” and demanded he resign from Congress as part of a multi-tweet meltdown.

During a committee hearing on Thursday, Rep. Mike Conaway (R-Texas) followed up that attack like the Trump crony he is by claiming that “we have no faith in your ability to discharge your duties.”

That drew a blistering response from Schiff, who detailed several examples of collusion by the Trump campaign in 2016, including the Trump Tower meeting with Russian agents to get dirt on Hillary Clinton, which was attended by Donald Trump Jr., Paul Manafort, and Jared Kushner.

Trump also publicly asked the Russians to hack Hillary emails, which they did later that same day.

Schiff also pointed out that Trump and his team repeatedly lied in an effort to cover up the meeting and that none of them ever called the FBI to report this illicit activity by a hostile foreign nation.

“I don’t think it’s okay that during the campaign Mr. Trump sought the Kremlin’s help to consummate a real estate deal in Moscow that would make him a fortune,” he said. “According to special counsel, hundreds of millions of dollars.”

Schiff put Trump and Republicans in their place and made it clear that he should not resign from the committee. While he conceded that Special Counsel Robert Mueller may not have found enough evidence to charge Trump with conspiracy, there’s still lots of evidence of collusion and corruptness that must be investigated despite Mueller’s probe coming to a close. Clearly, Republicans and Trump are still hiding something they don’t want Schiff and the committee to find. They are scared, and that’s why they are calling for Schiff to step down.