The United States Blues
Home News In AL Governor’s World Of Crazy, A Molester Is Better Than A... 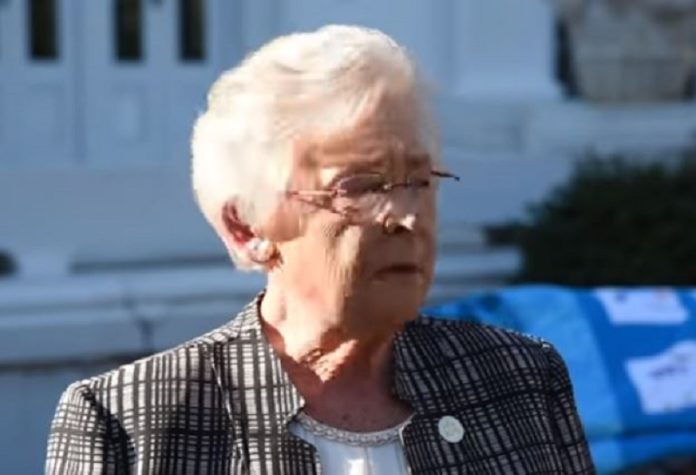 Kay Ivey is the current governor of Alabama. She ascended to that lofty position from Lieutenant Governor upon the resignation of Robert Bentley, who was basically forced out after a sex scandal involving one of his aides. Go figure. Ivey was the first Republican woman ever elected statewide and the second female governor in the history of the state. She’ll be running for re-election in 2018.

Reporters caught up with the governor after the annual Thanksgiving turkey pardoning event and of course asked her about former judge Roy Moore and the looming sexual abuse charges against him and how that would affect her vote on December 12. She responded quite candidly — and to her, a child molester is a better choice than a Democrat:

“I believe in the Republican Party, what we stand for, and most important, we need to have a Republican in the United States Senate to vote on things like the Supreme Court justices, other appointments the Senate has to confirm and make major decisions. So that’s what I plan to do, vote for Republican nominee Roy Moore.”

In between the lines, she tried to say that not enough evidence has been collected to say that Moore is a total and complete cretin definitively. There are now NINE women that have stepped forward with eerily similar tales of “being courted” by then-attorney Moore, who was in his 30s while they were in their teens. He claims they were “normal” relationships and doesn’t seem to see a problem with a 32-year-old man “dating” a 14-year-old girl. Ivey clarified her decision, adding:

“Consider all the information that you have. Certainly, it has an impact. But at the same time, the United States Senate needs to have in my opinion, a majority of Republican votes to carry the day and when they have to consider other major decisions. So that’s a factor, as well.”

But it won’t change her vote — she would rather have an alleged serial sexual offender in the Senate than a Democrat with a record of fighting for civil rights. And people wonder how Trump got elected?

Watch Governor Ivey say it her own southern drawl: