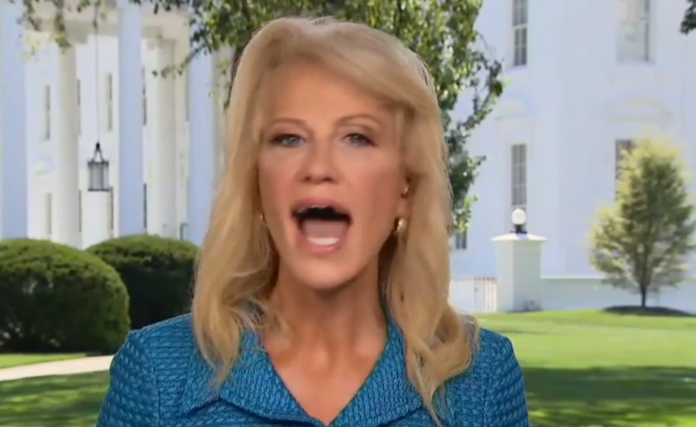 White House counselor Kellyanne Conway was more unhinged than usual during an appearance on Fox News Tuesday morning, accusing congressional Democrats of “palling around with terrorists” when asked about racist tweets and comments President Donald Trump has made the past couple of days regarding four progressive women of color who serve in the House.

Asked by Fox host Bill Hemmer if it was a good idea for the president to be attacking Democrats when he could instead be touting good economic news, Conway flew into a rage, remarking that “we’re sick and tired of many people in this country” who elected Reps. Alexandria Ocasio-Cortez (D-NY), Ayanna Pressley (D-MA), Ilhan Omar (D-MN) and Rashida Tlaib (R-MI). She then added:

“They represent a dark underbelly in this country of people who are not respecting our troops, are not giving them the resources and respect that they deserve. We’re tired of people not kneeling for the flag out of disrespect. We’re tired of some of these women palling around with terrorists!”

So we’re back to the flag protests, are we? That’s a sure sign of desperation by the White House. As for palling around with terrorists, President Trump has proclaimed his “love” for North Korean dictator Kim Jong-Un, a man who tortures women and children and places political dissidents in gulags. The president is also buddies with Russian President Vladimir Putin, who has journalists assassinated and bombs buildings, killing families.

And when Hemmer asked about a column Conway’s husband, George, wrote in which he said Trump was a stone cold racist, Kellyanne flat-out lost it, ranting:

“I work with this president and I know him. I know his heart and actions and how much he has helped people of color, and I go by what people do, not what other people say about them. I’m not going to run around pointing out everybody’s disagreements with the people in their lives. I sure could. I can point out people’s disagreement with their former spouses and current spouses and partners, future spouses and partners, but I won’t do that and I would caution all those people who asked me to gaggle not to do that. I know what this president has done. People are no longer languishing in prison, fewer people are getting addicted to drugs and in treatment. He is lifting up in this economy, people of all backgrounds and races, both genders, all geographic and demographic location. I go by what he does, I’ve been by his side for over three years, and I know who he is.”

We know who he is, too, Kellyanne. And there’s a saying that perfectly sums up your own myopia on the disgusting racism of Donald Trump: There are none so blind as those who refuse to see.