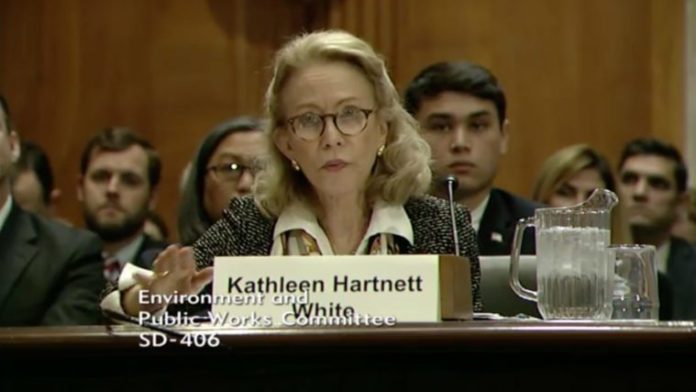 Many of Trump’s nominees have been entirely unqualified for the positions that they occupy. Take for example Betsy Devos, who is expected to resign shortly. However, White takes “unqualified” to a whole new level.

During a Senate confirmation hearing earlier this week, White abandoned her prior denial of climate change. Now, she believes that climate change is real, but she also argued that it remains undecided whether there is any link between human activity and climate change.

“Climate change is, of course, real. It’s likely that CO2 emissions from human activity have some impact on climate,” she said under questioning by the Senate Environment and Public Works Committee.

“I’m not a scientist, but in my personal capacity, I have many questions that remain unanswered by current climate policy. I think we indeed need to have more precise explanations of the human role and the natural role.”

Right you are Mrs. White – you are not a scientist. Therefore, your “personal capacity” does not matter one whit when compared to the findings of widely reputed climate research. This is what is so terrifying about these unqualified nominees and White in particular – her personal beliefs cloud her judgment so thoroughly that she genuinely seems to believe her fallacies.

Bloomberg Politics reports that while a senior fellow at the Texas Public Policy Foundation, White made comments in speeches and articles about “climate change and paganism and warned that solutions on Pope Francis’s 2015 climate encyclical would lead to poverty, socialism, and concentration camps.”

Did you do a double take after you read that one? Because I sure did.

White “had also called renewable energy a parasitic ‘false hope’ and said ozone isn’t harmful to human health ‘unless you put your mouth over the tailpipe of a car for eight hours,” according to Delaware Senator Tom Carper.

Carper and other Democrats said that those comments and others disqualified White from the role of White House Council on Environmental Quality.

“Ms. White has shown a disdain for science, a disregard for the laws and regulation already on the books, and a staggering disrespect for people who have views with whom she disagrees. Her tone, her words, and her actions are simply unacceptable.” – Sen. Tom Carper

Republicans, however, praised White’s work as chairman of the Texas Commission on Environmental Quality.

Sen. Sheldon Whitehouse (D-RI) was not having the Republicans’ complicity. During questioning, he laid White out to dry. Take the time to watch the clip below – it’s incredible.