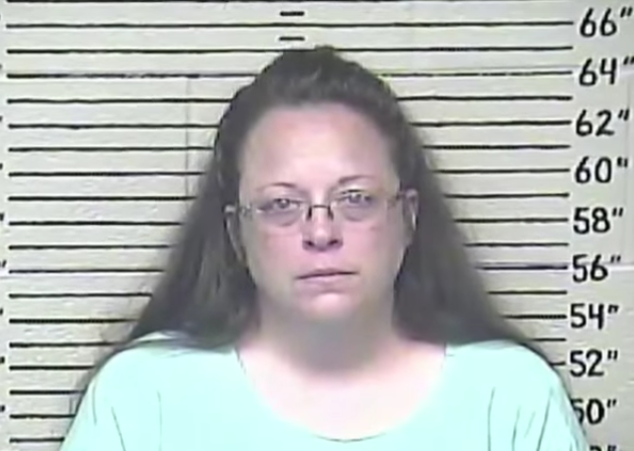 Disgraced former county clerk Kim Davis cost the state of Kentucky $225,000 in legal fees this week when a federal court upheld a ruling of a lower court holding the state responsible for her refusal to carry out the law.

In 2015, the Supreme Court ruled same-sex marriage legal across the country in the landmark Obergefell v. Hodges case.

Of course, conservative bigots like Davis oppose the ruling and protested by refusing to grant marriage licenses to same-sex couples under the guise of religious freedom.

Overall, she denied licenses to eight people, who responded by suing in court. In the end, they won and the district court ordered Kentucky to pay the legal bill.

The state appealed, but just lost again after the U.S. 6th Circuit Court of Appeals in Cincinnati issued their ruling on Friday.

“They prevailed against her in her capacity as a state official, not a county one,” U.S. Circuit Judge Richard Allen Griffin wrote in the decision. “Because Davis acted on Kentucky’s behalf when issuing and refusing to issue marriage licenses, the district court correctly imposed liability for the award on the commonwealth.”

“The district court ruled that Davis, as an official, acted on Kentucky’s behalf, meaning sovereign immunity protected her,” Griffin continued. “Plaintiffs dispute that ruling. The court also ruled that plaintiffs pleaded a plausible case that Davis, as an individual, violated their right to marry and that the right was clearly established, meaning qualified immunity didn’t protect her. Davis disputes that ruling. We agree with the district court on both issues and therefore, affirm.”

The ACLU hailed the ruling in a statement.

“The Court of Appeals correctly found that April Miller and the other ACLU clients prevailed by forcing the former clerk to abandon her unlawful policy of withholding marriage licenses from the public,” ACLU of Kentucky’s William Sharp said. “By affirming the sizable fee award, the court also sent a strong message to other government officials in Kentucky that it is not only unconstitutional to use public office to impose one’s personal religious views on others, but that it also can be a very expensive mistake.”

Kentucky can still appeal the ruling to the Supreme Court, where it might have more luck finding a bigoted majority that will rule in their favor. But if the high court actually cares about the rule of law, they will hand Kentucky another embarrassing defeat.

Kim Davis has already been humiliated by getting ousted from office in November and is currently being sued by some of the plaintiffs for damages.