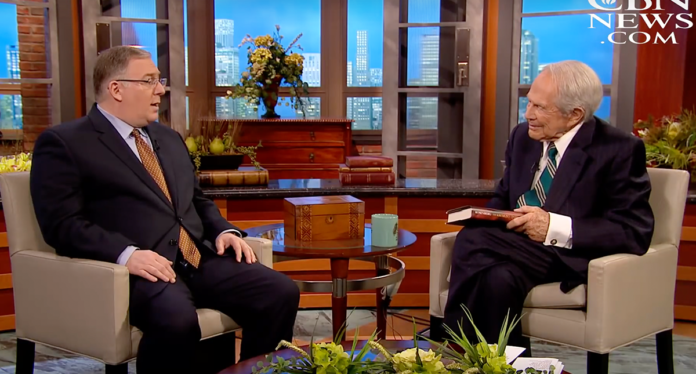 Conservative and evangelical Author, Joel Rosenberg has released a new book, The Kremlin Conspiracy, and has made the rounds on right-wing media, including the 700 Club with Pat Robertson, and many spots on Fox News.

This end-timer, who once worked for radio host Rush Limbaugh, believes Jesus is coming back soon, and his stories alluding to Vladimir Putin seem to advance the notion that the end is nigh.

The problem with that?

He is being taken as an “expert on Russia” by some Fox News viewers, introduced as such by some Fox hosts. Rosenberg said:

“With every passing day, I fear that fiction might be trending towards fact.”

In an appearance with Pat Robertson, the aging host asks how much the antagonist in Rosenberg’s book is like the real Putin. Rosenberg said:

“Well, in the Kremlin Conspiracy my fictional leader is fictional. I mean, he’s not Putin. Let’s say he’s Putinesque. That allows me to disconnect the reader from the day-to-day headlines and take you on a worst-case-scenario war game, in a sense, without getting tripped up on, ‘Do I like Putin? Do I not like him? Is he complicit with America?'”

Complicit with America? Or with Trump? He did seem to avoid that one, didn’t he? Also, is it so hard to decide whether you like a murdering dictator?

Most alarmingly, Christian evangelicals seem to have a favorable view of both Putin and Donald Trump. It appears that the author is trying to wake up his readers to the “existential threat to America” that the real Putin holds.

He’s very clear about his views on the real Putin and is concerned about Trump’s “weak” posture in response to the threat he poses.

“Putin is more dangerous to us and our allies than radical Islam. And that’s saying something.”

Even the extremist evangelical leader Pat Robertson, an avid Trump supporter gets it. That’s momentarily reassuring. What’s not reassuring is that this fiction writer is being hailed as some sort of prophetic Nostradamus, his words “ripped from the headlines” of the real news. Then, of course, there’s the problem that he believes America and Russia are ramping up for an end-times style armageddon.

In his book, he talks about Putin destroying the NATO alliance in 96 hours. In reality, his response to Trump’s weak posture: prayer.

He appears to be teaching conservative evangelicals about the threat of Putin with parables, which they would certainly be more apt to relate to, considering their leanings on Biblical teachings. It actually might be a very helpful thing he’s doing.

However, in another arena where fiction blurs lines with reality, Fox News, Rosenberg is sometimes lauded as a “Russia expert,” without clearly pointing out that his expertise is actually that of writing a political thriller.

Fox has introduced him as “the author of a very important book,” a “New York Times bestselling author and author of the brand new book.”

Instead of discussing his work of fiction, he comments on real current events, such as the expulsion of Russian diplomats from embassies in America and all over Europe, or the poisoning of the British ex-spy on British soil that resulted in those expulsions.

In fact, MediaMatters notes that Rosenberg has been credited as a “national security expert,” and asked to discuss if world events indicate that the biblical End of Days is on the horizon. It appears that the blurring of the lines between fact and fiction come so easily. He was even likened to Nostradamus for his “special gift” of foreshadowing the future, after all.

And therein lies the real problem: For some extreme conservatives, the outcome is a foregone conclusion: the big war to end all wars. They look for signs of it coming and offer only prayers, alluding to impending doom when they see a President who is either too weak or too compromised to confront real threats against America and the world. Then again, most of them voted for Trump, to begin with.

Would they vote willingly for the end times? You decide…

They readily welcome imaginary “experts” on America’s state of affairs when offered, but fail to offer support to actual experts like ex-CIA chief John Brennan, or ex-FBI Director James Comey, or even Republican Senator John McCain, all of whom recognize that Trump himself could offer a threat to America, just as much as Putin.

America will need much more than thoughts and prayers if we are to navigate these perilous times. We’ll need to listen to the real experts, and try to avoid self-fulfilling prophecies of the end altogether, not encourage or vote for them.