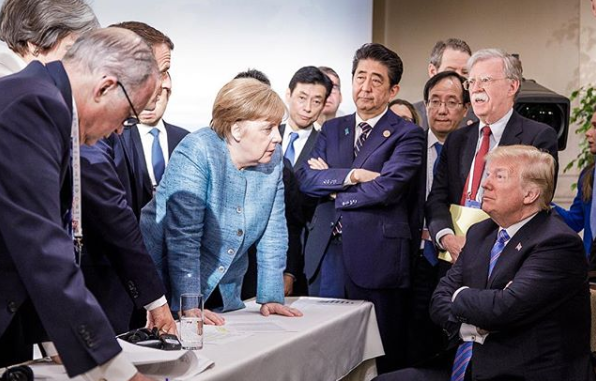 Trump withdrew from the Joint Comprehensive Plan of Action agreement last year after falsely accusing Iran of violating the deal even though the International Atomic Energy Agency says the Iranians are complying with it.

Even Trump’s own intelligence chiefs confirm that Iran is complying with the deal, which prevents them from developing a nuclear weapon, but also warned that the only reason why Iran may consider violating the deal at this point is because Trump withdrew the United States from it and slapped new sanctions against them.

Trump has been demanding that the other signatories of the deal, including Germany, France, Great Britain, Russia, and China also withdraw.

During the Munich Security Conference this week, Pence once again demanded our allies comply with Trump’s petty demand.

But Merkel stood strongly behind the deal and pointed out the importance of preserving it.

“I see the ballistic missile program, I see Iran in Yemen, and above all, I see Iran in Syria,” Merkel said. “The only question that stands between us on this issue is, do we help our common cause, our common aim of containing the damaging or difficult development of Iran, by withdrawing from the one remaining agreement? Or do we help it more by keeping the small anchor we have in order maybe to exert pressure in other areas?”

Merkel also observed that Trump’s withdrawal of American forces from Syria would help Iran obtain more influence in the region.

The German leader’s remarks gained wide support and applause while Pence only received a tepid response, something that shocked him since he expected wild praise after uttering applause lines.

Clearly, our allies understand that preserving the deal is the best chance the world has of preventing Iran from developing a nuclear weapon, which is far more crucial than punishing them for other activities since a nuclear device in the hands of terrorists would be a greater disaster than anything else Iran is doing. If Trump really wants to reign Iran in, his first step should be reversing the withdrawal and lifting the sanctions as agreed upon in the deal. Then we can work with our allies to pressure Iran in other areas of concern. Throwing a temper tantrum and making demands is not American leadership. And as long as Trump thinks it is, it will be up to our allies to lead the way.

Because at this time, Merkel is the real voice of reason and the true leader of the free world.