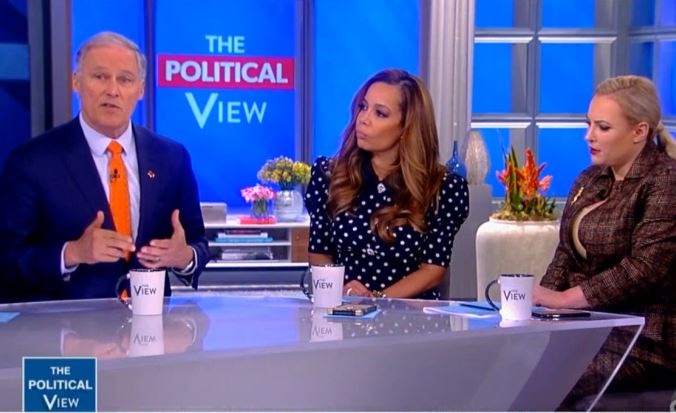 The Democratic field is getting quite crowded. Over the weekend, Washington State Governor, Jay Inslee joined the race to an enthusiastic crowd of supporters. Today, he went on The View to introduce himself to more Americans and certainly showed that he is not ‘just another candidate.’

In fact, Inslee may be the Democrats best hope to beat Donald Trump. He is not someone who “talks a good game.” Inslee backs up his strong talk with proven results.

What has he done in Washington State that might merit voters to give him a good look over? Well, he has built a very strong economy in the western state and has done it with progressive policies. His state has the highest minimum wage in the country, they legalized marijuana, more access to affordable healthcare with things like paid family leave than anyone else, and their environment is much more sound than many other states.

Much of the driving force behind his policy success is driven by one mandate — climate change.

Inslee doesn’t just talk a good climate change game, he delivers. His state boasts a six-billion-dollar wind energy business humming along. When people talk about states being the “lab” for large scale federal programs, this is exactly what states are supposed to do. He uses climate change as a job growth engine. In other words, in the way he does things, everyone wins — people and business.

On The View today, the GOPers on the panel tried to “shut him down” but came up empty. First, Abby Huntsman tried to posture like Inslee wasn’t a token candidate for climate change. Inslee was able to demonstrate that his policies lead to growth along with a better planet. While other candidates are trying to outflank each other “to the left” Inslee is able to create his own pragmatic progressive lane that is paved with results and success.

Meghan McCain then tried to spout some propaganda about the “green new deal” touted by some of the more progressive wings of the Democratic party. Inslee, on one hand, set her straight on the facts and di it with grace, charm, and the way we would want our President to speak to our citizens, especially when we disagree.

Check out the full segment with Inslee below;