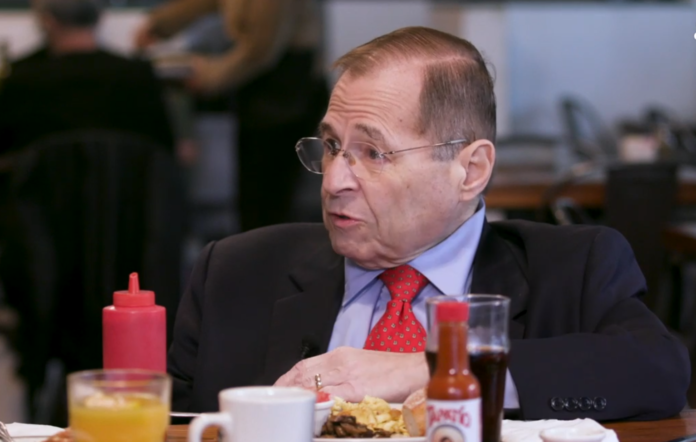 Rep. Jerry Nadler (D-NY), who serves as chairman of the powerful House Judiciary Committee, is accusing Attorney General William Barr of lying to Congress and the American public so he can protect President Donald Trump and help enable Trump to become a “dictator,” according to CNBC.

Any impeachment hearings would begin in the House Judiciary Committee, and Nadler maintains that the Mueller report proves Trump did indeed collude with Russia during the 2016 election, then committed obstruction of justice with numerous attempts to derail the special counsel’s investigation. Nadler added that Barr is now lying to protect the president:

“If you read the Mueller report, there was tons of evidence that they knew the Russians were interfering with the election on their behalf. They welcomed it, they wanted it, and they coordinated with it. Colluded, in a word. There’s no question about that.

“Bill Barr is just a liar, and he’s just representing the president.”

“The less charitable interpretation is he’s doing whatever he has to do, to protect the president personally. And he’ll hide whatever he has to hide. Lied may be too strong a word, but he certainly misrepresented very strongly what was in the report.

“The more charitable interpretation is that he simply believes in the so-called unitary theory of government, and this tyrannical theory that any president cannot obstruct justice, that as long as he believes that he didn’t do anything wrong, he can stop an investigation. Which is a terrible doctrine because it would mean that you can’t investigate any president for doing anything. And that he is acting now to protect that point of view.”

Worst of all, Nadler noted, is that the White House’s endless stonewalling and refusing to cooperate with Congress is not allowing for oversight of the executive branch, which is clearly mandated by the Constitution:

“They’re trying to say that Congress, representing the American people, can’t get information, and therefore, can’t function. The effect of that is to make the president a monarch, to make him a dictator, and that’s what we’ve got to fight.”

That led CNBC host John Harwood to ask if that meant impeachment was inevitable. Nadler replied:

“It depends where the American people are, whether they want to go that way or not. I don’t want to make it sound as if we’re heading for impeachment. Probably we’re not. Probably, but I don’t know.”

The law applies to everyone, even the president. The minute that changes, this country will have become an autocratic nightmare from which there is no return.