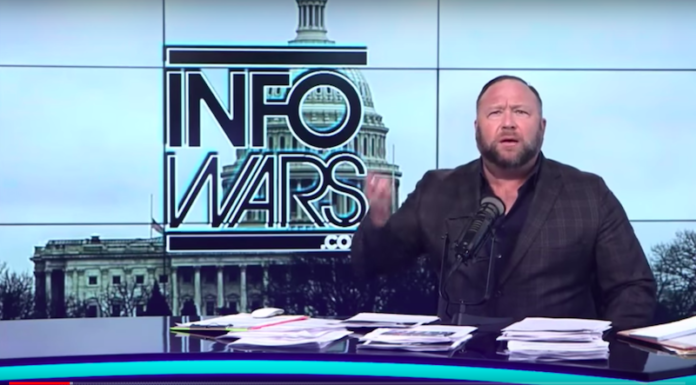 Alex Jones, the infamous InfoWars owner, will now face a deposition from families involved in a lawsuit against him. The families are from Newtown, Connecticut, where 20-year-old Adam Lanza shot 20 children at Sandy Hook Elementary School in 2012.

Unfortunately, Jones and the conspiracy theorists that he enables took up the cause of Sandy Hook, calling the whole shooting a “false flag” operation. Jones led an army of harassers to the families, calling the entire event a hoax. And according to a new report by The Hill, they have a chance to have their voices heard in court:

Connecticut Superior Court Judge Barbara Bellis ruled that Jones must sit for a five-hour deposition by attorneys for the families. Bellis also ruled that three others critical to Infowars’s operations could be deposed by the families, according to the Hartford Courant.

Given the substantial platform of InfoWars, the families filed suit against Jones for adding to the trauma of losing their children with his conspiracy theories.

Jones also attempted to keep his financial and marketing records from the families, but a judge ordered him to turn those over last month.

Mark Barden, a father from the suit who lost his son Daniel in 2012, says that this suit against Jones and InfoWars is about far more than money.

“For years, Alex Jones and his co-conspirators have turned the unthinkable loss of our sweet little Daniel and of so many others into advertising dollars and fundraising appeals. It is far beyond time that he be held accountable for the pain his false narratives have caused so many …”

The ruling comes just in time for Valentine’s Day, a grisly reminder of yet another mass shooting just last year at Marjory Stoneman Douglas in Parkland, Florida. The children of that tragedy have been fighting for gun reform across the country, and only time will tell if they are able to shift the political needle enough to save more families like Sandy Hook’s from conspiracy theorists like Alex Jones.

Parkland survivor @DavidHogg111's goal for 2020 is to encourage more young people to vote. His goal is 71% youth turnout, up from 50% in 2016. Help reach that goal today by sharing this registration link far and wide: https://t.co/onyjsbGE7y pic.twitter.com/flwclpGAZj