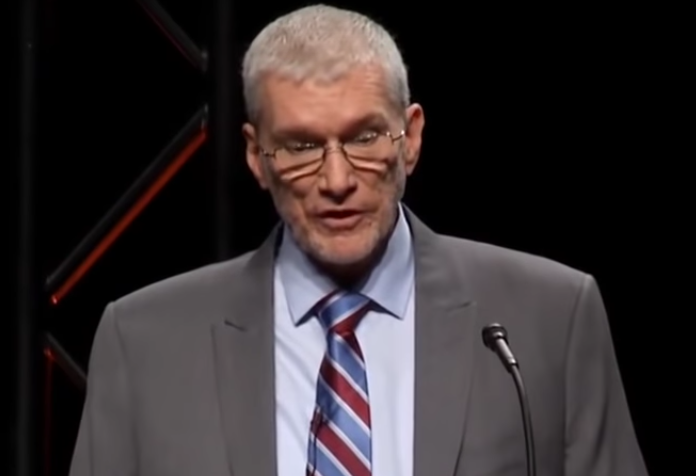 Creationist pastor Ken Ham, who built a theme park based on Noah’s ark on the taxpayer dime, got his a** handed to him on Twitter Sunday for attacking public libraries as “dangerous places for kids.”

Libraries are on the rise again as people jump to support them to keep them open for our kids, and one of many reasons for that rising popularity is that public libraries are diversifying the collection of books offered by including LGBTQ materials.

Of course, Ham is an evangelical “Christian” who hates people who are different. And he believes that children should only be allowed to read the Bible so that they are as narrow-minded as him and ignorant enough to be brainwashed.

So, he took to Twitter to condemn libraries and public schools as the “enemy.”

Increasingly (sadly) so, but public libraries are becoming dangerous places for kids (of all ages). And sadly, the majority of kids from church homes have already had their hearts & minds captured by the enemy through public schools, TV etc. Christian… https://t.co/PYzMXkjtTS

parents need to be reminded: “You shall teach them [God’s Word] diligently to your children, and shall talk of them when you sit in your house, and when you walk by the way, and when you lie down, and when you rise” (Deuteronomy 6:7)

And it didn’t take long for Twitter users to destroy him in response.

“Libraries are dangerous places for kids”… do you ever pause and really think about the words that are coming out of your silly piehole?! pic.twitter.com/vRrBXHIlma

I propose that we treat LGBT community members with the same name-calling and shunning that Jesus offered the prostitute and the corrupt tax collector.
*Checks notes*
“Come in and have supper”. Huh!

Here we go, yet again, with christians getting set to burn libraries. Two thousand years and it is still one of the things they do best… well, that and genocide.

It’s been a while, but I seem to remember something like, “A new command I give unto you that you love others as you love your god.” or some such thing. Modern christians seem to think that hate is a virtue.

Referring to anyone as ‘the enemy’ isn’t what the Bible teaches, Ken. Live as a child and don’t judge others. Isn’t that the whole point? That God will judge them so you shouldn’t…

Libraries aren’t as dangerous as the churches full of pedophiles

Still not as dangerous as being alone in a church with the priest/minister.

Right, because learning about reality is so terrible when it makes you realize the Christian boogeyman isnt real. Maybe if more Christians did this, we wouldn’t have the fools praising Trump, as if he were actually anything remotely close to a decent human being.

Gay and trans people have existed for thousands of years, if not tens of thousands. Your bigotry does nothing to improve their lives. Your rhetoric eventually results in people dying as it doesn’t fit with your fairytale.

You’re a dangerous extremist, Ken, and certainly no Christian to be spreading this hateful garbage. #GodMakesNoMistakes. We are all god’s children. 🏳️‍🌈🇺🇸

So it’s ok to teach my children about razing entire cities to the ground and killing every living thing therein, including children, but not about two people of the same sex falling in love with each other? You sir, have some messed up ideas about morality.

Only cults try to limit what their children learn so as not to have facts interfere with their dogma.

Evangelicals like Ken Ham are the true threat to our children. They believe in forcing religion upon them and indoctrinating them into believing as they do, including hating others for being different.

If Ham and other evangelicals were still wondering why people are abandoning the church, it’s because of their hate, not public libraries.