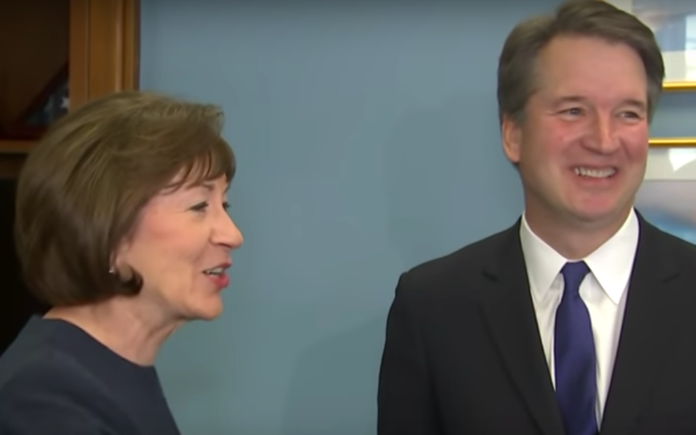 Senator Susan Collins (R-Maine) received bad news this week when the Maine Beacon newspaper reported on her legacy being tied directly to every vote Supreme Court Justice Brett Kavanaugh casts in every decision.

During the nomination battle in October 2018, Collins repeatedly stood up for Kavanaugh, even going so far as to deliver a speech on the Senate floor declaring that Kavanaugh won’t vote to overturn Roe v. Wade because he told her he wouldn’t. She believed him over women’s rights groups who warned that Kavanaugh is an enemy of abortion rights.

As it turns out, the women’s groups were right. Earlier this month, Kavanaugh cast a dissenting vote in a case that would have allowed a Louisiana anti-abortion law to take effect and close nearly all clinics in the state. The only reason why the law was ultimately blocked is that Chief Justice John Roberts voted with the 5-4 majority. If Kavanaugh had his way, abortion would be nearly illegal in Louisiana and other states that have chosen to pass copycat bills that place an undue burden on clinics.

Now women’s groups and pro-choice advocates have declared war on Collins as she prepares to run for re-election in 2020, and a Maine newspaper is not helping her cause by hanging Kavanaugh around her neck.

“Whether she likes it or not, Sen. Susan Collins can expect to take heat just about every time Supreme Court Justice Brett Kavanaugh takes a conservative stance on a polarizing legal issue,” the Maine Beacon wrote. “That was evident last week after Kavanaugh broke from his colleagues in an abortion ruling. The Supreme Court’s majority blocked a Louisiana law that would have restricted access to abortions in the state, but Kavanaugh argued the law should have gone into effect.”

Americans across the country immediately directed their ire towards Collins, who insisted Kavanaugh would not relentlessly attack the right to choose. But that’s exactly what he’s doing, and every vote he takes to weaken abortion rights makes Collins look really bad.

“Legal experts say there’s been no situation in recent decades in which a single senator has been similarly perceived by the public to have elevated a justice to the Supreme Court,” the paper reports.

Collins’ vote for Kavanaugh has been targeted due to a number of factors, said Alan Morrison, the Lerner Family Associate Dean for Public Interest & Public Service at George Washington University Law School.

The Maine senator is facing re-election in 2020, and she was widely thought as someone who might vote the other way on Kavanaugh, he said. “The Democrats are taking this as an opportunity… Anything that Kavanaugh does that anybody doesn’t like, they can say, ‘See, I told you.’”

And it won’t just be his votes on abortion since Collins considers herself more liberal on social issues.

Collins can expect a similar backlash from the left any time Kavanaugh weighs in on hot-button issues. Those could include possible future cases dealing with abortion, gay rights, partisan gerrymandering and environmental issues.

This is not good news for Collins, who faces an increasingly tougher battle in 2020 every time Kavanaugh casts a vote. It’s like Collins is casting the vote herself because she foolishly believed his lies about what he will do on the high court. Just as he duped her, she duped millions of women across the country and in her home state who relied on her to protect women’s rights. That betrayal will not be forgotten.