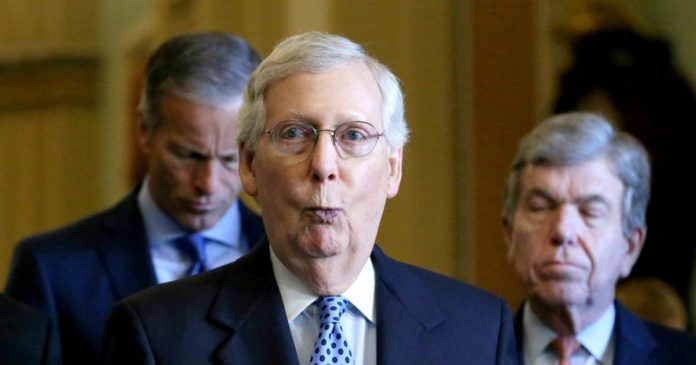 According to Senate Majority Leader Mitch McConnell (R-KY), reparations for the horrific sin of slavery in the United States are unnecessary because Barack Obama was elected president.

At a press conference Tuesday, McConnell had this to say about the issue of reparations:

“I don’t think reparations for something that happened 150 years ago for whom none of us currently living are responsible is a good idea.”

And then McConnell decided he would list all of the ways this country has already addressed slavery:

“We’ve tried to deal with our original sin of slavery by fighting a civil war, by passing landmark civil rights legislation. We’ve elected an African American president. I think we’re always a work in progress in this country, but no one currently alive was responsible for that, and I don’t think we should be trying to figure out how to compensate for it.”

McConnell: “I don’t think reparations for something that happened 150 yrs ago for whom none of us currently living are responsible is a good idea. We’ve tried to deal with our original sin of slavery by fighting a civil war …We’ve elected an African American president.”
Via ABC pic.twitter.com/yGQLpeyHGz

As HuffPost reports, there’s an important hearing Wednesday in the House of Representatives:

The House Judiciary Subcommittee on the Constitution, Civil Rights and Civil Liberties is slated to hold a hearing on reparations featuring testimonies from actor Danny Glover and author Ta-Nehisi Coates, who thrust the matter back into the national dialogue with his 2014 Atlantic essay “The Case for Reparations.”

The hearing will fall on Juneteenth, the American holiday commemorating the emancipation of slaves. It is expected to cover HR 40, a bill sponsored by Rep. Sheila Jackson Lee (D-Texas) to establish a commission to study reparations and develop relevant proposals.

But despite that, McConnell doubled down on his ridiculous remarks, telling reporters that another problem with reparations is that it would “be pretty hard to figure out who to compensate.” He then added:

“We’ve had waves of immigrants as well who’ve come to the country and experienced dramatic discrimination in one kind or another, so no, I don’t think reparations are a good idea.”

What isn’t a good idea is keeping Mitch McConnell in the U.S. Senate. He needs to be removed from office via the ballot box by voters in 2020. He will not be missed.