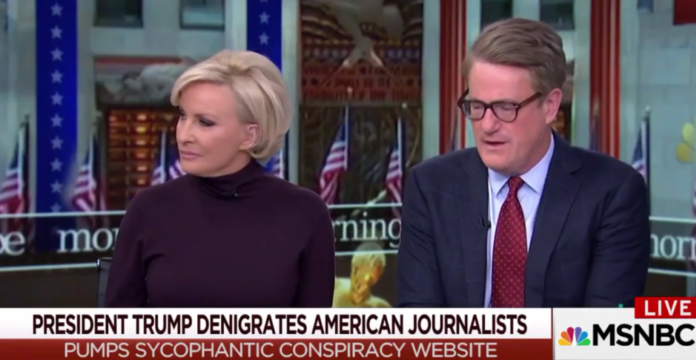 Donald Trump’s constant attacks against the media are putting American journalists in danger, and Morning Joe blasted him for it.

Over the weekend, Trump targeted CNN International for reporting the facts about him to the rest of the world, only to follow-up on Monday morning with another attack on CNN and the rest of the media excluding Fox News.

.@FoxNews is MUCH more important in the United States than CNN, but outside of the U.S., CNN International is still a major source of (Fake) news, and they represent our Nation to the WORLD very poorly. The outside world does not see the truth from them!

We should have a contest as to which of the Networks, plus CNN and not including Fox, is the most dishonest, corrupt and/or distorted in its political coverage of your favorite President (me). They are all bad. Winner to receive the FAKE NEWS TROPHY!

“You know what? I’m sorry — this is where somebody on the set needs to say, Wow, that person seems unhinged, imbalanced and not fit to be president,” Morning Joe host Mika Brzezinski said after reading his tweets. “He really seems out of his mind.”

Because Fox News has willingly volunteered to be Trump’s propaganda machine, Trump is rewarding them by pretending they are real news.

But Trump’s attacks on our real journalists are sending a message to authoritarian nations that put them in danger.

Joe Scarborough pointed out that Trump is essentially telling nations like Russia that they can jail our journalists if they want to because he doesn’t care. Countries around the world used to be too afraid to persecute our reporters, but that is seriously close to changing because of Trump and the way he treats journalists.

“That message hasn’t been sent by an administration that doesn’t even have ambassadors in these outposts and has now sent a message to tyrants from Turkey to Russia — do what you want with our reporters because we don’t like them,” Scarborough explained. “We don’t believe them because they won’t kiss our ass every day on the air and spew propaganda 24 hours a day, and lie to our viewers about how they’re doing.”

Scarborough also noted that journalists risk their lives every day to bring us the facts from places all around the globe and that many make the ultimate sacrifice, such as a camerawoman for Christiane Amanpour who was shot in the face for covering the facts in Bosnia.

“This is a challenge to the First Amendment and a free press,” the Morning Joe host continued. Scarborough then called upon lawmakers from across the political spectrum to speak out against Trump’s attacks because “there are some things that we have to be united on.”

Here’s the video via Vid Me…

Morning Joe is right. Donald Trump’s attacks against the media must stop immediately. Our free press is doing their job every day to bring the truth to the American people. It’s time for us to defend them.