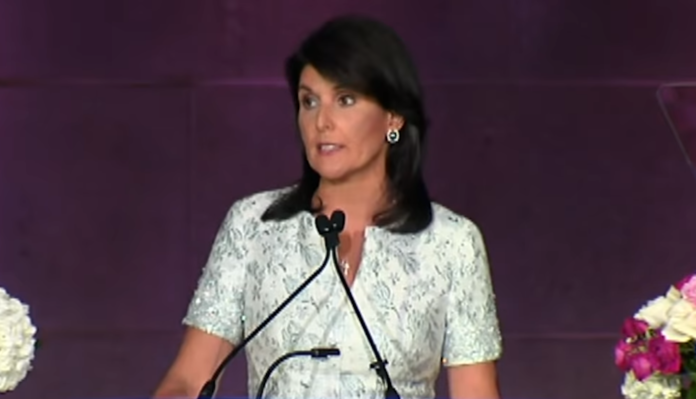 Former UN ambassador Nikki Haley said Monday night that allowing women the right to make their own choices when it comes to their reproductive health “is not real feminism.”

Speaking at the Susan B. Anthony List’s Campaign for Life Gala in Washington, D.C., Haley also said that those advocating for abortion rights are only creating hostility among women and trying to impose their beliefs on others, HuffPost reports:

“Unfortunately, many on the left use the abortion debate to divide women and demand conformity,” she said. “They do this in the name of feminism. But that is not real feminism.”

Apparently, Ms. Haley thinks it’s much more in keeping with feminist ideals to allow men to make restrictive laws that seek to control women’s bodies because that’s the way things are intended to be in this country. No wonder she’s a Republican.

Ironically, Haley only succeeded in making the pro-choice argument with her attempt to shame those who advocate for a woman’s right to choose, remarking:

“The idea that women must adhere to a particular set of values is one of the most anti-women ideas in today’s culture. It is a rejection of the ideas of equality and tolerance that the women’s movement is supposed to be about.”

Equality? Tolerance? How is it the least bit tolerant to deny women the right to decide whether or not they want to have a child if they’re pregnant? Some of the most intolerant people in this country can be found on the anti-choice side. There are even those in the anti-abortion movement who have even said it’s OK to kill doctors who perform abortions and that God approves of such violence.

The abortion issue has been placed front and center in the 2020 election thanks to states such as Alabama, Georgia, Louisiana, and Missouri, that have passed bills which would criminalize the procedure and in some cases imprison health care providers for 99 years.

But the majority of Americans support a woman’s right to choose, and that alone could spell doom for Republicans in next year’s election.