The United States Blues
Home Elections Paranoid Pence insits the FBI spied on him and Trump but offers... 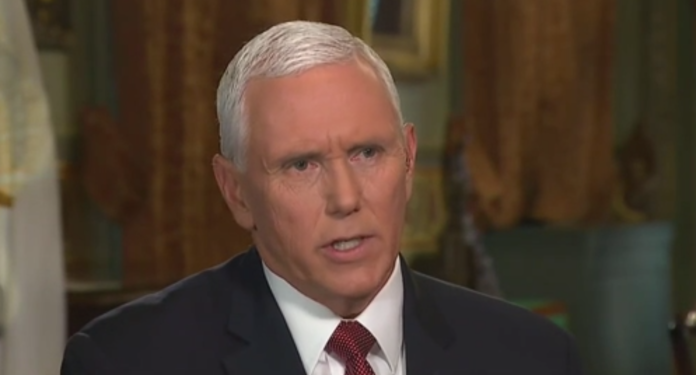 Now that he’s been hanging out with President Donald Trump for three years, Vice President Mike Pence has begun spinning some of the same bizarre conspiracy theories that his boss is known to traffic in, telling Fox News that the FBI spied on the 2016 campaign.

During an interview with Fox host Sandra Smith, Pence insisted that “spying” had taken place:

“We’ve got to get to the bottom of how all this started. The American people have a right to know how this investigation even began.

“And as the attorney general said when he testified before Congress, there was spying. We need to understand why there was [and] whether there was a sufficient predicate.”

The American people, via their elected representatives in Congress, are also entitled to see the full report from Special Counsel Robert Mueller with no redactions and all of the supporting evidence, and yet Attorney General William Barr refuses to turn over that information. Pence wasn’t asked about that.

When Smith asked if Pence though he had personally been spied on, he responded:

“Well, I think we need to find out.

“We really need to get to the bottom of how this all began and if there was a violation of the rules, if the law was broken, the people that were responsible need to be held accountable.

“But I have to tell you, it’s very offensive to me.”

Are the numerous instances of Trump obstructing justice as laid out in the Mueller report offensive to the vice president? Or does he believe, as the attorney general does, that a president can break as many laws as he sees fit in order to advance his agenda?

Not surprisingly, Pence’s remarks are almost word for word what came out Trump’s mouth in April when he said:

“There was absolutely spying into my campaign. I’ll go a step further. In my opinion it was illegal spying, unprecedented spying and something that should never be allowed to happen in our country again.”

But the president’s son, son-in-law, and campaign manager meeting with Russian nationals to obtain “dirt” on Hillary Clinton is copacetic for Trump, Pence, Barr, and other Republicans? These people have a very screwed up concept of ethics, don’t they?