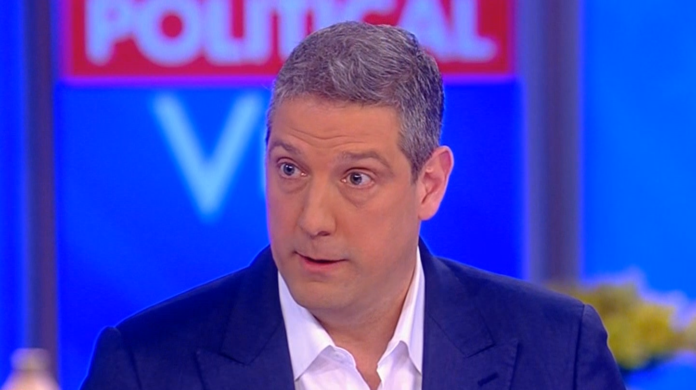 Rep. Tim Ryan (D-OH) threw his hat into the ring Thursday on “The View,” announcing that he was seeking the 2020 presidential nomination of his party. He’s the first candidate to make such an announcement on the daily ABC talk show aimed at women.

Ryan said the main reason he wants to run for president is to heal the political and economic divide he sees in the country:

“Our country has been divided for a long time. The first thing we have to do is unify.”

The eight-term Ohio Congressman also said it was his daughter who finally convinced him to seek the presidency. A friend of hers said her father was being transferred from a local General Motors plant:

While Ryan has said in the past the he supports workers, he is also seen as being pro-business, remarking in February:

In a statement the Ryan 2020 campaign released simultaneously with his appearance on “The View,” Ryan also noted that he wants to focus on “the dignity of work,” adding:

“I’m running for president because we have a real shot at uniting again — to restore the dignity of work and the feasibility of the American Dream. We have a chance to once again unite this country under our core principles and ideals.”

“We can restore the dignity of a secure retirement and respect for those who shower after work. We can lift our children to reach higher, to seek academic and vocational excellence. We can climb out of our vicious cycle of insidious debt and reach higher, competing together in a global market — not against one another here at home.”

But with the Democratic Party becoming more diverse and more progressive, it remains to be seen if Ryan’s message will resonate with Democratic primary voters, many of whom are seeking a bold new candidate who can successfully challenge President Donald Trump in next year’s election.