The United States Blues
Home Environment Trump gets flattened for attacking Democrats and lying about the Green New... 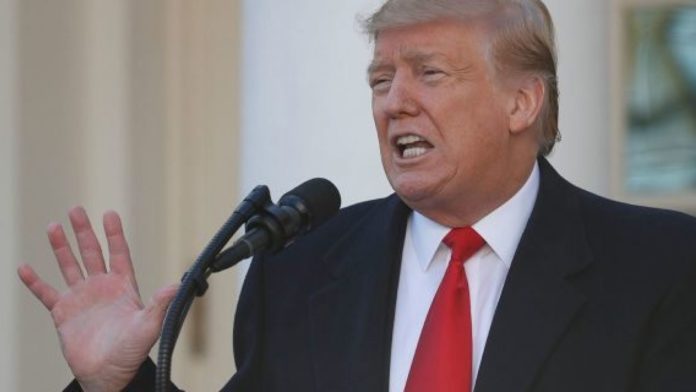 President Donald Trump mocked Democrats on Saturday night by telling lies about the Green New Deal, a sweeping piece of legislation that would significantly accelerate the fight against climate by modernizing our technology and cutting pollution by upgrading to the use of renewable energy sources.

Introduced by Rep. Alexandria Ocasio-Cortez (D-N.Y.), the goals of the Green New Deal include “a shift to 100 percent renewable and zero-emission energy sources, with a ten-year “economic mobilization” to phase out fossil fuels and transition away from nuclear energy.”

In addition, the deal calls for healthcare for all, sustainable wages and retirement security, all while creating millions of jobs that would go a long way toward making America energy independent and healthier while eliminating poverty and pollution.

It’s a great plan that is supported by many powerful Democrats, but Trump mocked it on Twitter.

I think it is very important for the Democrats to press forward with their Green New Deal. It would be great for the so-called “Carbon Footprint” to permanently eliminate all Planes, Cars, Cows, Oil, Gas & the Military – even if no other country would do the same. Brilliant!

As usual, Trump has no clue what he’s talking about.

During an interview with Tucker Carlson on Friday night, Ocasio-Cortez adviser Robert Hockett, a Cornell University law professor, explained that the actual goal is to reduce air travel, not eliminate it entirely.

Indeed, air travel is necessary for world travel. But planes could switch to cleaner fuels, too. And high speed rail would significantly reduce the need for air travel in the United States, which means most air travel would occur internationally. It’s a smart plan that has a lot of potential to boost the economy, prevent or reverse climate change, and modernize our technology in ways that make our country the envy of the rest of the world.

As for the military, it has already been transitioning to renewable energy sources over the last decade, a move that will make our forces more efficient and less dependent on vulnerable and finite fossil fuels. Therefore, the Green New Deal does not eliminate our military, nor does it affect our military preparedness.

If we continue to refuse to adopt clean energy initiatives, the rest of the world is going to overtake us and be light-years ahead of us. That truly puts our nation at a disadvantage compared to other nations such as China, which is pushing forward with clean energy and high speed rail. At some point, doing nothing will put our national security in jeopardy because our enemies will adopt the more efficient technology in their own forces. Now is not the time to hold back. The future has to happen now and it’s time to drag America into a better future whether oil companies and conservatives like it or not.