Another high-profile Trump supporter has expressed regret for voting for him.

The day after Oakland Raiders running back Marshawn Lynch sat out during the national anthem and stood for the Mexican national anthem, the president threw a temper tantrum, thus continuing his obsession with attacking the NFL and trying to tell the league what to do.

Marshawn Lynch of the NFL’s Oakland Raiders stands for the Mexican Anthem and sits down to boos for our National Anthem. Great disrespect! Next time NFL should suspend him for remainder of season. Attendance and ratings way down.

Yep, you read that right. He is demanding that the NFL suspend Lynch for exercising his First Amendment rights.

Twitter users relentlessly hammered Trump for not having anything better to do as president.

But the wife of Oakland Raiders coach Jack Del Rio came out swinging and schooled him for attacking the NFL.

“President Trump I voted for you, which I now regret,” Linda Del Rio wrote. “Football is a powerful platform -here’s the charitable work we did in Mexico City. Take more time being president and less time trying to shame.” 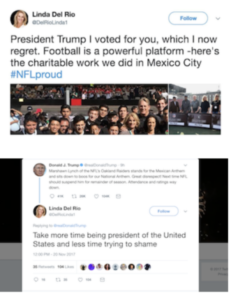 It makes one wonder how many others regret their vote for Trump and how many of them will vote against him in 2020.

Of course, conservatives rushed to attack Del Rio, forcing her to shut down her account to silence all the hate.

But while it may seem that there are a lot of Trump supporters right now, it’s plain to see that his idiocy and pettiness are beginning to cause fans to turn on him. Linda Del Rio admitted that she voted for him and then expressed her regret for voting for him. Trump is going to have an uphill battle to win re-election, especially if he continues to drive away his voters.

That sets the stage for Trump to become a one-term president. And he’ll only have himself and his big mouth to blame.