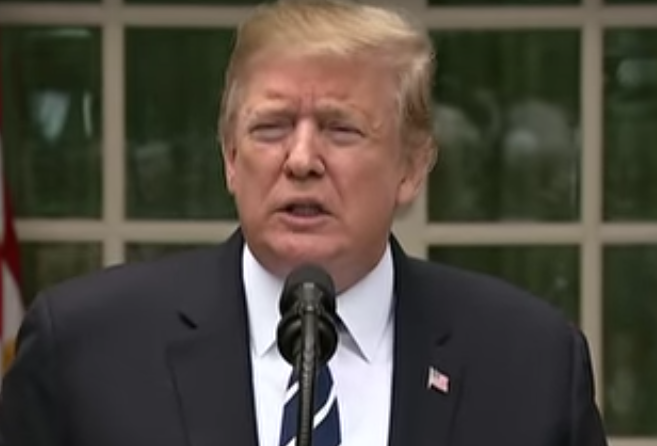 President Donald Trump threw a hissy fit while speaking to reporters in the Rose Garden on Wednesday after storming out of a previously scheduled meeting with Democratic leaders over House Speaker Nancy Pelosi (D-Calif.) accusing him of “engaging in a cover-up.”

Pelosi made the remarks earlier in the day after a meeting with House committee chairmen. Just hours later, Trump whined about what she said and used it as an excuse to end the meeting, the purpose of which was to discuss Trump’s infrastructure spending proposal.

He then called for a press conference in the Rose Garden where he put a sign on the podium that criticized the Mueller probe and the resulting Mueller report. When Trump began speaking, he lectured the press by whining about how they report the news and claimed that they should be reporting on crimes he alleges were committed by Democrats. He also insisted that he doesn’t do cover-ups and demanded Democrats end all investigations before he will work with them on any legislation.

Many political and legal experts laughed at him on Twitter.

Why not just put up a sign on the podium saying, “I am a loony tune”? https://t.co/RuWO3ccV4M

Fixed the President’s Rose Garden sign for him. pic.twitter.com/faQZ4xAPhy

Typical of this WH, they left out the key facts: Mueller convicted Trump’s campaign manager & his deputy. Trump’s lawyer is in prison & Trump is an unindicted coconspirator in that case. Longtime ally Roger Stone awaits trial. Russians are charged with attacking our election. https://t.co/GDG8lFmWFp

This is @potus essentially saying he is holding the American people hostage until lawful investigations of him are suspended. The concept of governing is completely alien to him. https://t.co/tff2BqMkSr

Trump is acting so scared. I wonder why. https://t.co/6GsRpdhABz

Seriously, this is why his lawyers were terrified of him testifying. It’s difficult to know if he actually just admitted here that Don, Jr. called him *before* the Trump Tower meeting or if it’s incoherent stream-of-consciousness rantings devoid of factual underpinning. https://t.co/o146GgiQna

Reminds me of mob bosses shutting down worksites to get what they want. https://t.co/CgfovhGvlV

For any president to refuse to perform his Art II responsibilities unless Congress abandons its Art I duties is a gross dereliction of duty, itself an impeachable course of conduct that seeks to hold the American people hostage.

As @SpeakerPelosi has said, the House is going to hold the President accountable.

We’re also going to work on healthcare, infrastructure, and more.

The President’s temper tantrum just shows how terrified he is of the former, and how little he cares about the latter. https://t.co/uT2EvQVTSy

There were investigations going on three weeks ago when we met.

But now that you were forced to say how you’d pay for infrastructure, you threw a temper tantrum and ran away.

And you gave us this pre-planned excuse. https://t.co/JjRq6Joepe

Seriously, Trump is a petulant child who knows he is cornered and won’t be able to get away with his crimes. He is desperate, and he used Pelosi’s remarks to get out of having to do anything on infrastructure because he doesn’t have a real plan. His “I don’t do cover-ups” remark will go down in history as his version of Nixon’s “I am not a crook” and as courts continue to deal blows to his lawsuits against Democratic subpoenas, it more clear than ever before that he is going down. And he’ll be kicking and screaming the whole way.