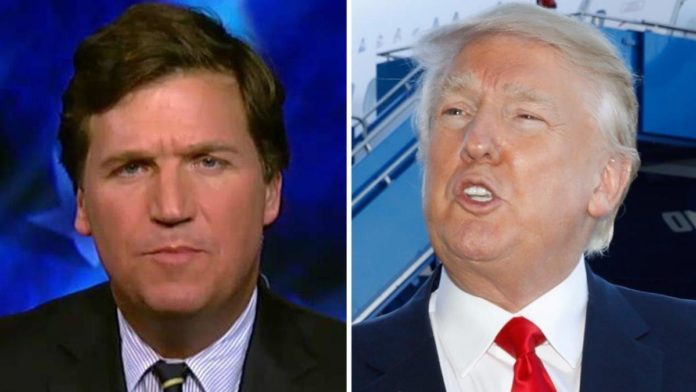 For some unknown reason, President Donald Trump decided it would be a good idea to quote Fox News hack Tucker Carlson in his latest attack on the news media he hates so much.

“The American Media has changed forever. News organizations that seemed like a big deal are now extinct. Those that remain have now degraded themselves beyond recognition, like the New Yorker – or they’ve been purchased by Jeff Bezos to conduct unregistered lobbying for………

…. Amazon, like the Washington Post. It’s hard to remember that not so long ago America had prestige media outlets, but not anymore.” @TuckerCarlson The Fake News Media is the true Enemy of the People!

Be sure and notice that Carlson singled out the New Yorker, which ran a story today accusing Fox of essentially controlling the current president, who reportedly gets most of his policy proscriptions and talking points from the right-wing “news” outlet. It’s gotten so obvious and worrisome that some now refer to Fox as Trump TV.

And of course there’s the ubiquitous slam of the Washington Post, owned by Jeff Bezos, who just so happens to be the richest man in the world, no doubt a galling fact for fake billionaire Donald Trump.

The US government has changed forever. The executive branch that seemed like a big deal is now a running joke. Those who remain have degraded themselves beyond recognition as shills for an ignorant authoritarian who lacks honesty, integrity or enough brain cells to function.

You’re mad because you can’t control the media and make everybody write nice things about you. You’re a huge child. Grow up, you lowlife, gaslighting Scumbag.

The American media has produced some of the most incredible, eye opening, meticulously reported pieces of journalism since Watergate, you illiterate slug. You are demented. Resign.

You might as well make up quotes and attribute them to a mashed potato because that’s how much Tucker Carlson’s opinion matters.

Yes, Fox News is the enemy of the people. About time you caught on.