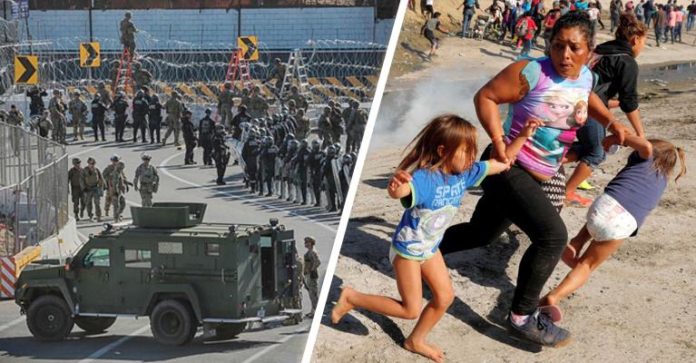 According to President Donald Trump, using tear gas on babies is no big deal because the chemicals in the gas are “very safe.”

Asked about the use of tear gas against immigrants at the U.S.-Mexico border who are seeking asylum in the United States, Trump tried to downplay such brutal methods, asserting that the gas used “was a very minor form of the tear gas itself. He also declared that tear gas is “very safe,” even when used on children.

Minutes later, the president reiterated his often used line on the issue of immigration itself:

“Here’s the bottom line: Nobody is coming into our country unless they come in legally.”

While it was at it, Trump also decided to toss out a conspiracy theory regarding why border patrol officers had used tear gas on children, suggesting that the parents of the children had placed them in harm’s way deliberately:

“Why is a parent running up into an area where they know the tear gas is forming and it’s going to be formed and they were running up with a child?”

“These children are barefoot. In diapers. Choking on tear gas. Women and children who left their lives behind — seeking peace and asylum — were met with violence and fear. That’s not my America.”

Rachel Schmidtke, program associate for migration at the Woodrow Wilson International Center for Scholars Mexico Institute, told the Associated Press that Sunday’s clash between migrants and border patrol is partially the result of Trump’s harsh policies on the issue of immigration:

“This situation is now escalating to the point of a self-fulfilling prophesy. The more you squeeze, the more it artificially creates something that didn’t exist, but now is starting to become a crisis.”

And the potential exists for things to get even more horrific, leaving parents and their children fatally wounded, the AP notes:

Featured Image Via the BB