The United States Blues
Home News Trump Storms Out Of Meeting With Dems When They Won’t Cave On... 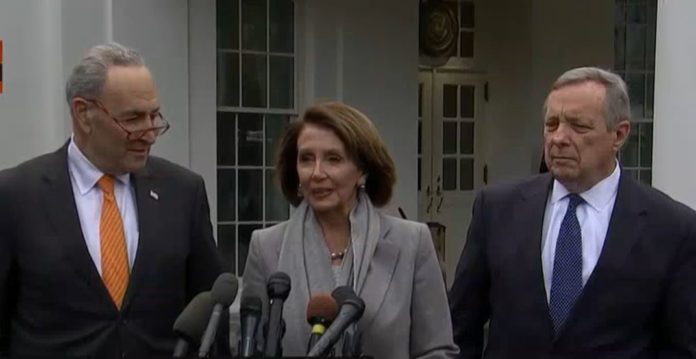 Today, President Trump met with Congressional leaders from both parties. Unfortunately, the meeting only lasted a few short minutes. The reason it only lasted that long is because Trump refused to continue the discussion with Democrats when they showed they were not about to cave into his demands.

Of course, his demands were that the Democrats suspend reality and pretend there is an actual “crisis on the border” even though every measure of that says that there is no crisis at all — except for the separation of children from their parents and the efforts of the Trump administration to bottleneck anyone seeking asylum.

What exactly happened, according to Senate Majority Leader Chuck Schumer, is that Trump asked Speaker of the House Nancy Pelosi if she would give him his wall if he would re-open the government. Pelosi said no. This coming after The Speaker called out Trump on the various lies he has been telling about what is happening at the border.

Trump, knowing he was going to lose, decided to grandstand and stormed out of the meeting declaring it a “waste of time.”

Check out the clip of Schumer describing the meeting below:

Of course, Republicans were quick to try to defend the POTUS, but majority leader Kevin McCarthy was obviously “fudging” what the POTUS said and tried to slip in the words “border security” vs. the word “wall.”

Democrats have made it more than clear that they support real border security efforts that might have an impact — but not the wall, which has been deemed to be an ineffective measure by most credible estimates. So the odds that McCarthy’s account is accurate, are slim. And for the record, the wall does not equivocate to border security.

McCarthy claimed that Democrats had made no offers. That also is a false statement. The Democrats have passed bills of their own and passed the bill offered and passed in bi-partisan fashion by The Senate.