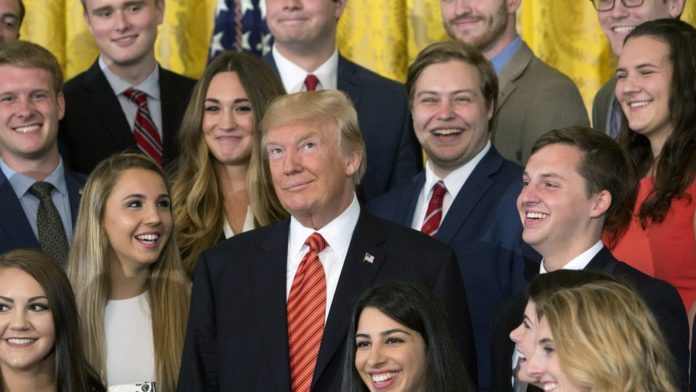 In January, the White House brought in a new crop of interns who were immediately warned by Zoe Jackman, who serves as director of the internship program, that there would be severe consequences if any of them had plans to become “leakers.”

A eye-opening new report from the Daily Beast reveals that all of the interns were forced to sign non-disclosure agreements (NDA) and told by a member of the White House counsel’s office that if they broke the agreement, there would be severe legal and financial penalties:

“This was all a standard facet of the Trump intern orientation process, billed as an ‘ethics training’ — underscored by implicit legal threats from President Donald Trump’s in-house lawyers.”

Ned Price, who was a spokesman for the National Security Council in the Obama administration, says making young interns sign such a document is unheard of and probably unenforcable to boot:

“All White House employees—from senior officials to interns—understand the necessity of discretion based on the fact that they hold positions of public trust, with an emphasis on public. But this White House’s approach to non-disclosure agreements, even for interns, seems to suggest that guarding against criticism of the president and his family—what most of us would consider to be protected speech—is just as important as safeguarding the sensitive information the American public entrusts to the government.”

One former Trump staffer has even taken the White House to court over the NDA she had to sign:

“Jessica Denson, a former Hispanic outreach coordinator for the Trump campaign, filed a class action in an attempt to invalidate the NDAs the campaign had ordered its employees to sign. Denson and her legal team argue that the campaign NDAs were ‘unlawful’ and didn’t permit staffers to make claims for workplace discrimination, for instance.”

Trump has defended his use of NDAs, telling the Washington Post during the 2016 campaign:

“When people are chosen by a man to go into government at high levels and then they leave government and they write a book about a man and say a lot of things that were really guarded and personal, I don’t like that.”

This from a man who flat-out urged the Russian government to hack into computers and find the missing emails from Hillary Clinton’s computer.

And the penalty for violating a Trump NDA is steep: $10 million, which is enough to silence just about anyone thinking of writing a tell-all book.

Tom Devine, legal director at the Government Accountability Project in Washington, D.C., says the current administration’s NDAs are not legally enforcable and are often used to intimidate staffers:

“Gagging interns is playing with legal fire. There is no White House exemption in the longstanding appropriations rider that employees who try to obstruct communications with Congress are subject to salary cutoff. Nor is the White House exempt from criminal liability since 1980 for obstructing witnesses in any federal investigation.”

It seems that the Trump non-disclosure agreements are yet another example of something we’ve often seen from this president: Bluster with no supporting substance.