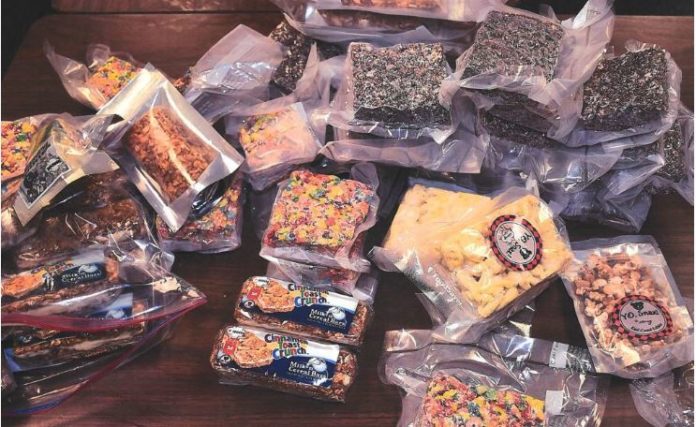 Cherokee County Sheriff Steve Mueller announced Wednesday that a man had been arrested for trafficking marijuana after deputies found a large quantity of pot, vape accessories, and numerous edible cannabis products at a home in upstate North Carolina.

From the report, the arrest seems somewhat routine. The one who was allegedly caught selling all this stuff,  Michael Lawrence Dower, was pretty much caught red-handed in possession of all the pot products and almost 8,000 dollars in cash. Some may be for legalization, and others may be against it, but under current North Carolina law, the arrest was legitimate and lawful.

That is where all the legitimacy and lawfulness ends, unfortunately.

Not content to rest on the laurels of this bust, Sheriff Mueller decided to grandstand as only someone who is clueless about marijuana would do. Mueller seized upon one of the “warning labels” on the merchandise.

This is what he said:

“The one warning label that disgusts me the most was ‘keep out of reach of children. Really? But then you market and package the marijuana products to look exactly like products that you and I as parents buy for children every day at local stores. A child ingests these products and the parents will end up planning a funeral because the child died of an overdose.”

Ok, let us unpack this pack of lies.

First off, while it is true that many marijuana products contain “warning” labels, they are not on there based on any “overdose” fears — or fear of death, for that matter.

Using the government’s own research as a guide, we learn this:

Why Cannabis Overdosing Isn’t a Thing

Speaking in terms of actual cannabis overdose, the reason for its impossibility is simple: you just can’t consume enough THC to shut down your organs unless you are a rodent. Per the Schaffer Library of Drug Policy, one study conducted showed that huge amounts of THC were unable to produce death or organ pathology in large mammals. In small rodents, death occurred as a result of central nervous system depression.

The amounts of THC administered in this experiment were enormous – the equivalent of a 154-pound person consuming 46 pounds of cannabis in a single sitting.

In other words, a person would have to smoke 250,000 times the usual dosage to reach the amount used in the study. And, even then, the dosage, assuming the study’s accuracy, would be nonfatal

The researchers concluded that the ratio of lethal dose to effective dose is “quite large” (also this is “quite” an understatement) and much, much larger than other commonly used psychoactive agents like alcohol or barbiturates.

The Drug Enforcement Agency agrees with this too and has for decades: in 1988, they issued a ruling that the average marijuana smoker would need to consume 20,000 to 40,000 times the amount of THC in a joint to risk dying.

But facts be damned, from Sheriff Mueller’s perspective. Even though science says that the possibility of a fatal overdose is virtually non-existent, Mueller decided to use the bust to promote propaganda that gets swallowed up by people who simply don’t know better and live in fear of things like marijuana.

Also notable is the fact that despite passing medical marijuana legalization laws, North Carolina’s GOP dominated legislature has routinely shut-down any attempts to put the law into practice. They have systematically stopped any programs to open dispensaries or make medical cannabis available.

So, in effect, North Carolina created a vacuum for which Dower and others like him can operate and profit. That profit, in effect, hurts the citizens of North Carolina as they never see the tax revenues raised in other states that have either medical or recreational marijuana regulations that have allowed retail sales to occur.

Of course, those numbers don’t include the jobs and peripheral businesses that create even more tax revenues.

Then there is the money needed for law-enforcement as it investigates and makes arrests over something more and more states are realizing is a futile proposition.

At the end of the day, everyone loses in North Carolina.