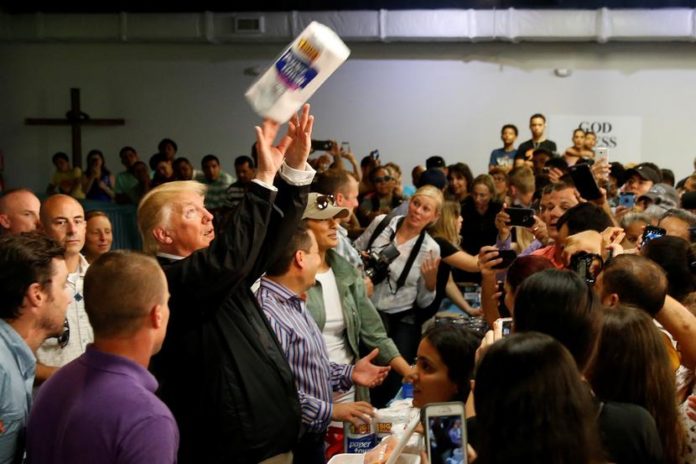 President Donald Trump is demanding that no more federal disaster relief funds be allocated for Puerto Rico as part of their recovery and rebuilding efforts, Axios reports:

“Trump doesn’t want to give Puerto Rico any more federal money for its recovery from Hurricane Maria, White House officials have told congressional appropriators and leadership. This is because he claims, without evidence, that the island’s government is using federal disaster relief money to pay off debt.”

Where did the president get such a ridiculous idea that Puerto Rico was using disaster money to help pay down the island’s debt? Apparently from an article he saw in the Wall Street Journal. The article asserted:

“Puerto Rico bond prices soared … after the federal oversight board that runs the U.S. territory’s finances released a revised fiscal plan that raises expectations for disaster funding and economic growth.”

On the basis of that one article, Trump decided that the government of Puerto Rico was scamming the U.S. out of relief money.

Last month, Trump tweeted out a similar conspiracy theory about Puerto Rico and funds allocated to help after Hurricane Maria ravaged the island:

The people of Puerto Rico are wonderful but the inept politicians are trying to use the massive and ridiculously high amounts of hurricane/disaster funding to pay off other obligations. The U.S. will NOT bail out long outstanding & unpaid obligations with hurricane relief money!

While Trump continues to operate under the false assumption that federal disaster relief is being used to service Puerto Rico’s debt, Congress made sure none of the money can be used for that purpose:

“Neither the island’s leaders — nor the board installed by the U.S. to oversee its budget — are proposing using disaster recovery aid to directly pay off bondholders or other lenders.”

While some $6 billion has been allocated to assist Puerto Rico, the island remains in the process of recovering from the disaster, Huff Post notes:

“Hundreds of thousands of people are still waiting for help, living in homes that are in desperate need of repair, according to The New York Times. The island’s leadership has said it needs billions more to rebuild, and in February said that it would cost at least $17 billion just to fix its beleaguered power grid.”

Apparently, Trump thinks paper towels should be all the Puerto Ricans need.