The United States Blues
Home Politics Congress Twitter Applauds After Pelosi And Schumer Call Trump Out For His Lies... 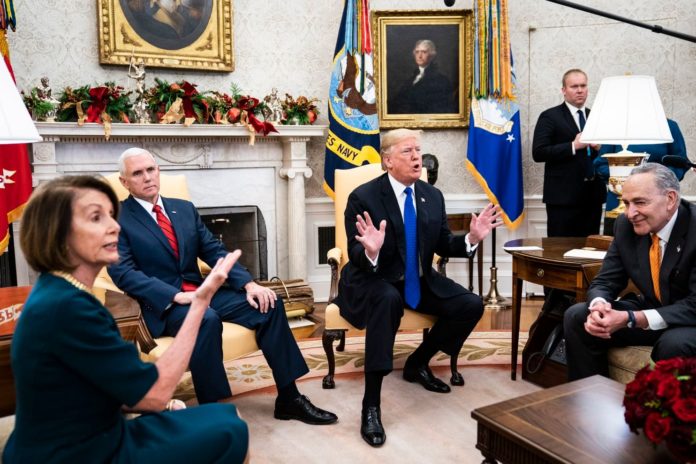 The meeting quickly turned contentious, as you can see in the video below, with Trump repeatedly talking over his guests and resorting to his usual tactic of lying when it came to specifics.

When Trump mentioned funding for the wall, Pelosi reminded him:

Congressional Democrats have already made it clear they aren’t going to give Trump money for his wall, if only because he promised Mexico would pay for it, not to mention that building a wall would be a tremendous waste of money.

Later, the issue of a government shutdown came up, and Pelosi reminded Trump his party currently holds the majority in both houses of Congress, so blame for any shutdown will fall squarely on the GOP:

“The fact is the House Republicans can bring up this bill immediately and set the tone for what you want.”

The president then began ranting and raving about the wall, sounding like a petulant child as he declared:

Schumer responded to Trump by pointing out that he does indeed exaggerate things and has even been called out by the media for doing so:

“Here’s what I want to say — we have a lot of disagreements here. The Washington Post gives you a whole lot of Pinocchio’s because they say you constantly misstate how much of the wall is built and how much is there.”

Before it was all over with, Schumer had even managed to bait Trump into bragging:

“I am proud to shut down the government for border security.”

Twitter loved the fact that Pelosi and Schumer pushed back at Trump and refused to let him tell his lies:

My God, when *Chuck Schumer* is raining down dunks on you, that’s just embarrassing.

I have to say I like what’s happening here. Trump is playing for the cameras, and Pelosi and Schumer are making him look like the pompous, uneducated, empty suit he is.

Dear @CNN & Jeff Zucker, I want to watch nothing but this “Trump, Pelosi and Schumer” multiple car wreck video on a loop all day. And I need close-ups of Pence’s face. Over and over. Please, please, please.

If you read Mike Pence’s lips here he’s repeating the Serenity Prayer like a mantra https://t.co/Wj2W8S1tZX

Trump has been able to hide how deeply stupid and bad at politics he is, because for 2 years he hasn’t had to deal with anyone but craven, suck-uppy Republicans who laugh at his weird non-jokes and placate him and bend over backwards to make him feel smart and capable. But now… https://t.co/K8xBDw2DYT

THE PRESIDENT has just robbed Republicans of the ability to say Democrats are shutting down government.

THE PRESIDENT has just robbed Republicans of the ability to say Democrats are shutting down government.

This is going to be quite the month

Later today, Trump will probably say Mexico is going to pay for the shutdown.