The United States Blues
Home Politics Congress When McConnell lifted sanctions on Russia, he helped out his top donor 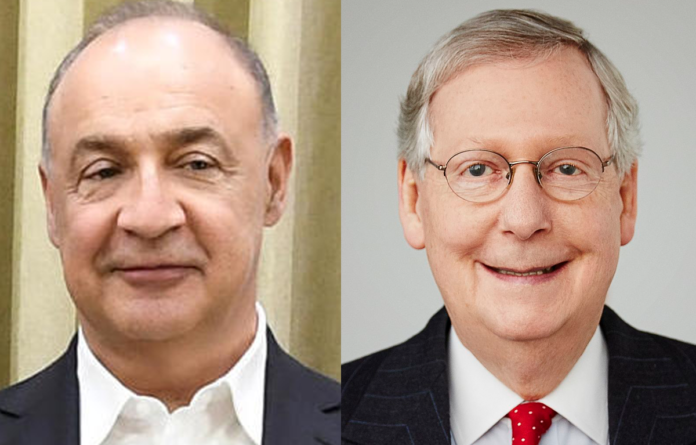 Some would say that lifting sanctions on Putin’s buddy, the oligarch named Oleg Deripaska, would be an extremely poor choice given the scandal of the Russia investigations since the moment Mueller was appointed.

Some might question why 42 Republican senators consented to give millions in breaks to the same oligarch to whom the orange-jumpsuit-wearing Paul Manafort owed millions of dollars and reportedly delivered American polling data to; The same oligarch who is the subject of very suspicious reports of alleged presidential election meddling. If you think this all stinks to Russian high hell, then you aren’t alone, and the Senate majority leader is right in the middle of it.

Scott Dworkin, co-founder of the Democratic Coalition makes it fairly self-explanatory why Mitch McConnell would think it wise to lift sanctions on Russians, however glaringly corrupt, compromised, and treasonous it may appear. In the podcast, Dworkin outlines how “Russian oil money flowed to the GOP Senate Leader; then he killed sanctions on the donor’s business partner.”

Dworkin first alleges that Trump has leverage over McConnell, in the form of kompromat. Why? For one: He hired his wife. Elaine Chao is the current Secretary of Transportation.

“To make matters worse, Donald Trump has some pretty obvious kompromat over leader McConnel, by virtue of his wife’s position in his cabinet,” says Dworkin.

Dworkin then revealed McConnell’s connections to a Russian-American involved in the Mueller probe in 2017 right after Trump’s inauguration.

“And it turns out that the Russian American giving money to Mitch has two long-time business partners who have been sanctioned under CAATSA because of their roles in the 2016 attack on America’s elections. That’s the Russian sanctions bill which Congress basically forced Trump to sign as his first piece of major legislation in 2017. One of them just had those sanctions shockingly dropped,” said Dworkin.

When the majority of Republican senators voted to allow Trump to drop the sanctions on businesses connected to Deripaska, they effectively helped out their top donor’s business partner.

Dworkin calls out Soviet-Ukranian-born businessman Leonard “Len” Blavatnik, a US and UK citizen who lives in London worth at least over 16 billion. Blavatnik’s conglomerate company is Access Industries. It seems that he is literally paying for access to the Amerian government with his massive contributions.

“He’s given a ton of cash to support Mitch McConnell and the GOP Senate majority. Blavatnik’s long-time business partner in Rusal is Oleg Deripaska.”

“Access donated 1.5 million dollars to the Senate Leadership Fund Super PAC during the 2016 election and another million through a subsidiary which also gave another million in early 2017.”

In all, Blavatnik’s donations are astronomical.

Of course, it’s not only McConnell who has benefitted. Former Speaker of the House, Paul Ryan, Senator Marco Rubio, and Senator Lindsey Graham all got millions in donations from Blavatnik’s firm. In all, there were many thousands of contributions leading up to the elections. However, it was Lindsey Graham, the senator from South Carolina, who seems to have benefitted the most.

“…He personally kept the Lindsey Graham campaign afloat in 2015 when he was a convenient punching bag for Donald Trump before he became a golfing buddy with America’s most entertained, least hardworking, and most lazy President ever,” said Dworkin.

Lindsey and Blavatnik, with a side of Dersh. Lindsey knows on which side his bread is buttered and who’s doing the buttering. pic.twitter.com/JZZ1ABhwwu

Other than through donations, Blavatnik’s human connections to the Trump administration go very deep.

“[Blavatnik] was partners with Treasury Secretary Steve Mnuchin in the filmmaking business all the way up to the summer after Trump’s inauguration.”

Journalist, Kenneth Vogel, points out how close the two men really are:

MNUCHIN did not request ethics guidance on his relationship with BLAVATNIK because the two had no business dealings, per @USTreasury.
They did know one another, though; Mnuchin attended a party on Blavatnik’s yacht. Here's Blavatnik's $100M yacht Odessa. https://t.co/N66xs8FDJT pic.twitter.com/OblUBazL6f

The connections between Blavatnik, his business partners, and the Trump administration keep going deeper and deeper. So deep, they make your head spin. No wonder the Mueller investigations are taking so long because it seems that no matter where you turn, conflicts of interest and connections to Russian oligarchs are there to be found. Find one Russian oligarch, and you are connected through them all to the top man, Putin.

Here's a chart from a recent article on Blavatnik showing the significant amount of donations made to McConnell-linked PAC and other members of the GOPhttps://t.co/bk93O5ekco pic.twitter.com/rcFwpBIMZo

To add insult to injury, immediately after the Trump administration lifted sanctions on Deripaska’s giant aluminum company, Rusal, a holding company invested in that company immediately turned around and hired a former Trump official to its board of directors. That man is Christopher Bancroft Burnham, who served on Trump’s State Department transition team, according to the New York Times.

Listen to Dworkin’s podcast for the full, convoluted Russian story.