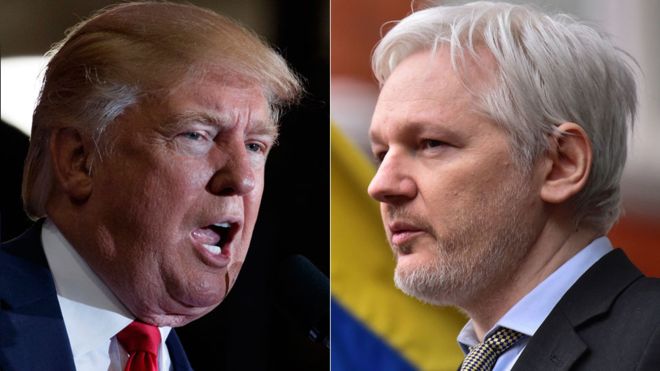 Even though he repeatedly referred to and praised hactivist group WikiLeaks on the campaign trail during the 2016 presidential race, President Donald Trump said Thursday after the arrest of WikiLeaks founder Julian Assange that he knew “nothing” about them.

Asked for a reaction Thursday to Assange’s arrest at the Ecuadorian embassy in London, Trump told reporters:

“I know nothing about WikiLeaks. It’s not my thing. I know there is something having to do with Julian Assange.”

Per pool, President Trump is offering his first reaction to the Julian Assange arrest: “I know nothing about Wikileaks. It’s not my thing.”

But as Business Insider has noted, Trump mentioned WikiLeaks on at least five occasions while he was running for president:

And for those who might want to dispute Trump said those things, we have video that proves he most certainly did:

Additionally, close Trump aide and adviser Roger Stone (who is now under indictment on one count of obstruction of an official proceeding, five counts of false statements, and one count of witness tampering) bragged that he met more than once with Assange in order to coordinate when would be the best time for leaks of information that would do the most damage to Democratic candidate Hillary Clinton.

Donald Trump knows nothing about WikiLeaks? He knows plenty, and his response suggests he’s worried about what all investigators will now be able to prove with Assange in custody.