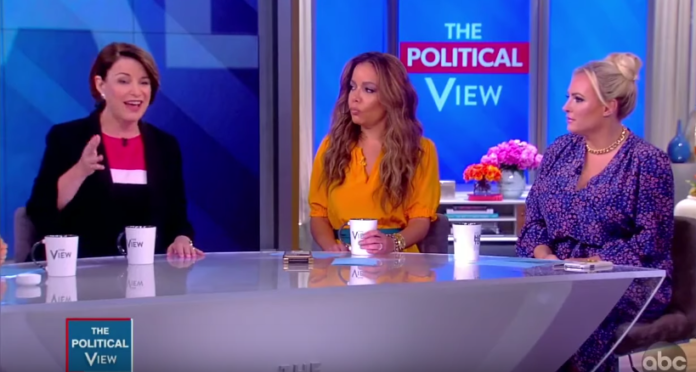 “The View” co-host Meghan McCain once again loudly voiced her opinions on abortion by using debunked claims, resulting in her colleagues and Senator Amy Klobuchar (D-Minn.) fact-checking her.

Abortion has been the top issue this week as Republicans in several states have passed draconian anti-abortion laws in an effort to challenge Roe v. Wade and control women and their reproductive health decisions.

These laws, which even evangelist Pat Robertson believe go too far and MSNBC host Joe Scarborough predicts will backfire on the GOP in 2020, are near total bans on abortion without exceptions for rape and incest victims. The laws even criminalize natural miscarriages and several forms of birth control.

McCain attempted to defend the laws by taking comments made by Virginia Governor Ralph Northam on late-term abortion out of context.

“Democrats look like they’ve gone very extreme on this issue,” McCain said. “It’s gone from being the party of ‘safe, legal and rare’ to having a conversation of late term abortion up until birth with the Ralph Northam controversy.”

Northam, a trained pediatric neurosurgeon, explained that third trimester abortions are “done in cases where there may be severe deformities. There may be a fetus that’s nonviable.”

“So in this particular example, if a mother is in labor, I can tell you exactly what would happen,” he continued.

Again, we’re talking about a NONVIABLE fetus or a fetus with extreme deformities that would make living a complete nightmare.

But Republicans claimed that Northam is advocating for abortion after birth while conveniently ignoring the circumstances Northam mentioned. Northam is a medical professional unlike most of the Republicans who criticized his remarks, including McCain.

“No woman seeks a third trimester abortion except in the case of tragic or difficult circumstances, such as a nonviable pregnancy or in the event of severe fetal abnormalities, and the governor’s comments were limited to the actions physicians would take in the event that a woman in those circumstances went into labor. Attempts to extrapolate these comments otherwise is in bad faith and underscores exactly why the governor believes physicians and women, not legislators, should make these difficult and deeply personal medical decisions.”

But McCain kept repeating her debunked claims about Northam’s remarks.

Klobuchar responded that women should make these medical decisions with their doctors without interference from fanatical lawmakers who have no clue what they are talking about.

Joy Behar and Sunny Hostin even slammed McCain for lying.

It should be pointed out that the Supreme Court left regulating third trimester abortions to the states, so it’s not illegal in Virginia, just highly regulated and rare.

Once Klobuchar was allowed to speak again, she noted that over 70 percent of Americans support upholding Roe v. Wade, and that number includes Americans who describe themselves as “pro-life.”

In fact, 52 percent of Republicans back leaving the 1973 ruling intact.

McCain tried to object to Klobuchar’s use of facts against her, but the Minnesota senator and Democratic 2020 presidential candidate proceeded to shut her down some more.

“That includes people that might make a personal decision not to have an abortion, that’s their personal decision,” Klobuchar said. “But they don’t think their views should influence other people’s views. They have taken this so far any discussion about the nuances and things, that’s not where we are right now. These guys are setting this up, using women as political pawns to go to the Supreme Court. Anyone that cares about families’ rights to make their own decisions, this election couldn’t be more important.”