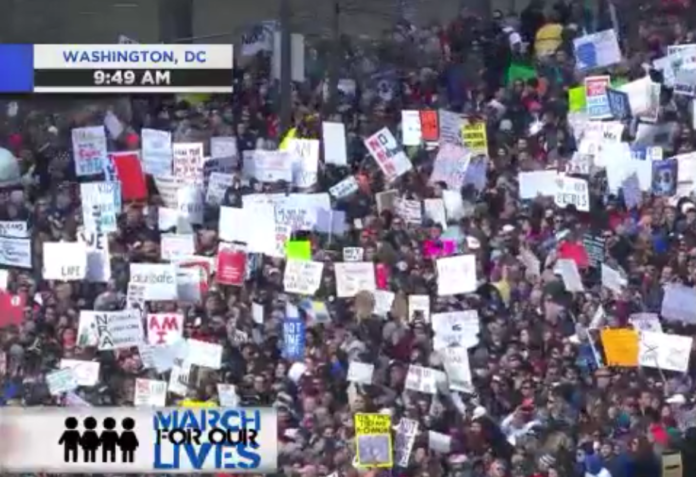 As students protest in the March For Our Lives event on Saturday, we are reminded that President Donald Trump’s proposal for preventing school shootings is an expensive plan to arm teachers, thus putting more guns in schools.

The tragic school shooting in Parkland, Florida caused a public outcry for gun control, especially when it comes to assault weapons like the AR-15, which has been the primary type of gun used in mass shootings across the country.

There have been calls to ban the weapon entirely, which would require a return of the 1994 Assault Weapons Ban that Congress allowed to expire in 2004.

But the National Rifle Association fiercely opposes such a ban and any other proposal to prevent school shootings that might involve gun control measures, even comprehensive background checks, and age-limits.

What they do support, however, is arming teachers, which is what Trump proposed in the wake of the Parkland shooting.

Trump wants to arm 20 percent of teachers in every school, which would require the purchase of firearms and hours of training. Both would be costly and would be a financial windfall for the NRA.

According to The Washington Post, 718,000 teachers would need to be armed and trained under Trump’s proposal. Teachers would not only need basic training every year but would also require advanced training as well.

“That more robust training means that the cost for our 718,000 teachers spikes to $718 million. There would almost certainly be some efficiencies of scale that would come into play here — systems would be developed to train teachers quickly and at less cost — but the figure would still likely run into the hundreds of millions of dollars.”

And that doesn’t include the cost of the guns themselves.

“Let’s consider the Glock G17, which the manufacturer touts as the world’s most popular pistol. It runs $500 apiece, meaning that our price tag for arming our teachers just went up by $359 million. Maybe Glock, too, would give the Department of Education a discount, perhaps cutting the price in half. That changes the total to $180 million.”

While $1 billion may seem like a small price to pay for school safety, putting guns in schools just makes classrooms more dangerous.

As it turns out, both educators and law enforcement officials oppose Trump’s proposal to arm teachers.

Not only have there been several documented shooting accidents in schools involving guns owned by teachers, the fact is that teachers would have to be just as trained as police officers, and even then they may not be effective. That case was made plain in Parkland when deputies chose not to confront the gunman despite their extensive training.

Meanwhile, teachers and school officials would rather the money be spent on improving education.

“Our students need more books, art and music programs, nurses and school counselors; they do not need more guns in their classrooms.”

Teachers are stressed out as it is. The last thing they should have to worry about is becoming security guards, too. And that’s not to mention the thought of, perhaps, having to kill a student and the emotional and psychological problems that could result from doing so.

The NRA supports arming teachers because they will profit from the gun sales and the training costs. They care nothing about the lives lost or shattered by gun violence. They only care about the money they stand to gain by pushing a non-solution to the problem; a problem that does not exist in countries like Australia and the United Kingdom.

Both nations instituted gun bans in 1996 after mass shootings. Neither country has experienced a mass shooting since.

The NRA knows this. However, acknowledging it and supporting similar laws would undermine their power and profits, which is why when arming 20 percent of teachers fails, the NRA will suggest arming all teachers and maybe even go so far as suggesting students be armed as well. It’s a never-ending and expensive cycle that will continue until Americans have had enough of paying the price, both in money and in blood.