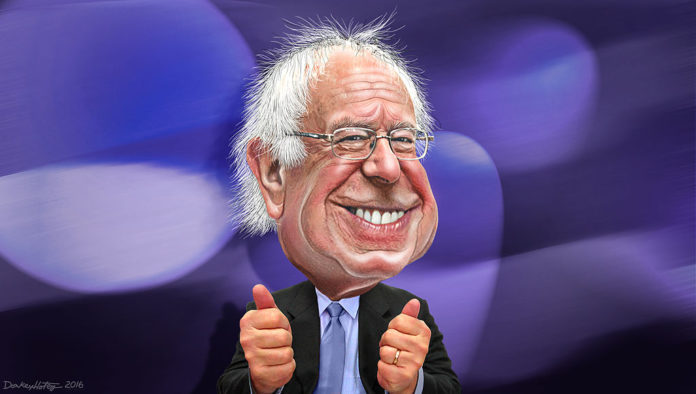 On Tuesday morning, the 2018 Grammy nominees were announced, and Bernie Sanders made the list. He was nominated in the spoken-word category for his audiobook recording of Our Revolution: A Future to Believe In, along with actor Mark Ruffalo.

This is the first time the Vermont Senator was nominated for the award, but if he wins, he will be in good company. Former presidents Jimmy Carter and Barack Obama have both earned two of the coveted statues for their mantles. Carter won in 2007, and 2015 and Obama took home the award in 2006 and 2008. Senator Al Franken won the award in 2004 before he won his Senate seat with Lies and the Lying Liars who Tell Them and Bill Clinton won in 2005.

While the list of politicians who have won is long, Sanders and Ruffalo are not a shoo-in. They are facing some stiff competition. Astro-physicist Neil DeGrasse Tyson is in the running with Astrophysics for People in a Hurry. Also nominated were Bruce Springsteen for Born to Run, Shelly Peiken for Confessions of a Serial Songwriter, and Carrie Fisher for The Princess Diarist.

This is not Sanders’ first foray into the recording world, however. In 1987, the then-Mayor of Burlington, Vermont recorded narration on a folk album called We Will Overcome. The album was the brain-child of Todd Lockwood, then the owner of the local recording studio, White Crow Audio. Lockwood explained how he came up with the idea:

Lockwood calls himself a Bernie fan since he watched his beloved town of Burlington blossom under Mayor Sanders’ leadership. “When he got into City Hall and cleaned house, suddenly we had music everywhere,” Lockwood says. Burlington is now home to a vibrant musical community and is the site of one of the premier Jazz Festivals in the US.

While Sanders’ office was not available for comment this morning, his project partner Mark Ruffalo was quick to congratulate the Senator. 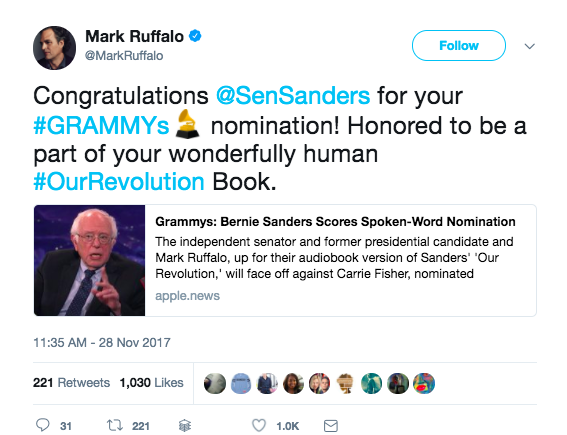