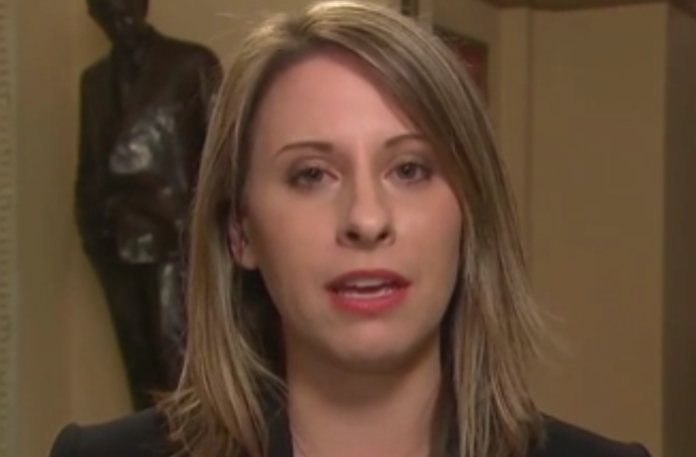 Rep. Katie Hill (D-Calif.) had some strong words for President Donald Trump on Thursday for holding the nation hostage over a wall.

Just a day after announcing he is ordering FEMA to stop helping California fire victims, Trump traveled to the southern border to promote his claim that there’s a real crisis that can only be solved by funding his vanity project.

On Friday, the government shutdown will tie the record for the longest shutdown in American history at 21 days. Meanwhile, thousands of federal workers are being hurt from not getting paid, including TSA agents, border patrol, and air traffic controllers, all of whom are absolutely essential for our safety.

Trump’s shutdown literally makes America less safe every day it continues, but he refuses to sign any of the bills the House has passed so far to end it because they don’t include billions of dollars for his wall, which he had repeatedly promised Mexico would pay for throughout the 2016 Election and afterwards.

As Trump visited the border on Thursday, Hill appeared on MSNBC with Ali Velshi and slammed Trump’s shutdown.

But first she blasted Trump for blaming forest management for the wildfires in 2018 that devastated her state, pointing out that his shutdown will make fires more likely and deadlier because fire fighters are not being trained and forest service personnel can’t do their jobs.

Then she lit him up for thinking about declaring a national emergency to fund a wall based on a crisis he manufactured:

“[W]hen you talk about declaring an emergency, a federal emergency, we’re from a state where we know all about emergencies and what should be a national emergency,” Hill said. “And this is simply not one of them when you’re talking about pretend facts. You can say it’s a true humanitarian crisis for the people trying to come here but it certainly is not a national emergency, and it’s just like —it gets more and more frustrating every single day to see how irrational he is. We can’t accept this anymore. We have to hold the line. This is like a toddler having a tantrum. This is unacceptable moving forward. Negotiate with us but not on the backs of people who again have nothing to do with it.”

Indeed, $5.7 billion is not nearly enough to build a wall along all 1,954 miles of border. He would need at least $30 billion, which means he could shut the government down another four or five times every time he demands wall funding and doesn’t get his way. That’s why Democrats are refusing to give in, because giving Trump incentive to do this over and over again is not an option.

Too many Americans are getting hurt by this shutdown to allow it to happen every time Trump wants something, many of whom Hill represents in her district.

“In my district, we have a number of air traffic controllers, one actually came here from my district,” she explained. “Her name is Christie. She’s a veteran, mother of two. She told me about the stress that this is putting her family through. I have stories of people whose kids are trying to open up lemonade stands because they want to help their parents. We have people picking up second jobs. This is with air traffic controllers. We have to have these people operating at 100 percent capacity, and they are picking up second jobs to pay their rent or mortgage. Talking to lawyers, it’s not even an option. How are you going to pay them?”

Hill concluded by unleashing a devastating accusation against Trump that every Republican should think about since they are complicit with Trump’s shutdown:

“It’s just —it really is a tragedy. this to me — I know it’s a strong word, but this is political terrorism.”

It’s a fitting term really. After all, America does not negotiate with terrorists, and at least Democrats are honoring that creed.