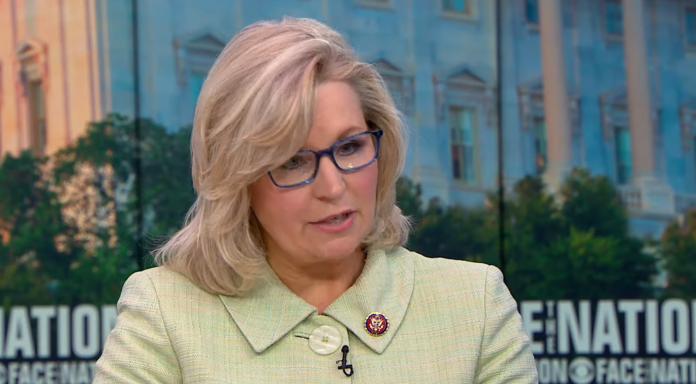 Rep. Liz Cheney (R-WY) got extremely agitated when “Face the Nation” host Margaret Brennan asked her questions Sunday about whether or not President Donald Trump is stoking racial tensions in the U.S. It got so bad that Brennan cut the interview short.

Brennan began by asking if it was appropriate for Trump supporters to chant “send her back” at a rally earlier this week in North Carolina. Rather than actually respond, Cheney tried to blame the media:

“The news media wants to make this about race — you just did it. It’s not about race, gender, religion… As Republicans we will fight against those even if the mainstream media accuses us of racism when we do this.”

When Brennan continued to press Cheney on the issue, the congresswoman finally relented, calling the “send her back” chant “wrong.” But she then added:

It should be noted that Rep. Omar has never advocated for any of those things. It’s yet another misrepresentation by yet another Republican, all of whom seem to delight in telling blatant lies about anyone who dares to oppose them.

Brennan then led the discussion back to Trump:

“That’s not what the president tweeted about this morning. He said, I don’t believe the four congresswomen are capable of loving our country.”

“Excuse me. Listen, you continue to put in these little points. Every time you do it you make the point I’m making. As Republicans we’re focused on substance and policy. We will do that no matter what the mainstream media will do.”

Rather than continue, Brennan ended the interview, remarking:

“Unfortunately we don’t have time to talk about Iran.”

“You should of asked earlier.”

“If the president tweets about it we will.”

Trying her best to have the last word, Cheney blurted out:

“He has tweeted about Iran quite a bit. It would be good to cover it all.”

But the host was more than equal to Cheney’s snark, concluding the segment:

As for Cheney’s assertion that Republicans want to talk about policy, that’s also a lie. Trump kicks up a spat with four women of color rather than admit he hasn’t accomplished a damn thing in three years other than making the rich richer and adding to his own bankroll with questionable decisions and deals that reek of conflict of interest. The GOP doesn’t want to debate. They want to throw mud.