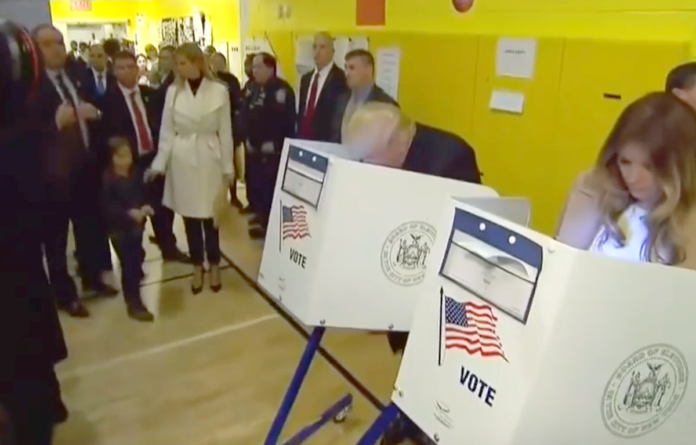 A senior advisor to the President of the United States just received approval from a foreign government for trademarks that would allow that advisor to begin production of voting machines. When read in this context, it sends off incredibly loud alarm bells, right? Worse still if you learn that that advisor happens to be Donald Trump’s daughter Ivanka.

Citizens for Responsibility and Ethics (CREW) in Washington revealed that Ivanka got approval for 16 new trademarks from the Chinese government while her dad the POTUS wages a trade war with the dictatorship. The approvals came three months after Ivanka decided to shutter her brand despite relying on Chinese manufacturing, but were first applied for in 2016.

According to CREW, Ivanka can now begin literally making the sausage, among other bizarre things like nursing homes and voting machines with her trademark brand.

One week after Ivanka received approval from China for additional trademarks in 2018, Trump abruptly announced he wanted to lift the ban on Chinese company ZTE even though the company was under U.S. sanctions and posed a national security risk according to top intelligence officials.

.@IvankaTrump is taking this country to the cleaners. She consorts with dictators and has sensitive intelligence without the right security clearance. She also just bought interests in voting machines…. could we pls hold her accountable? https://t.co/3pzZxUKLdR

“Since she has retained her foreign trademarks, the public will continue to have to ask whether President Trump has made foreign policy decisions in the interest of his and his family’s businesses,” CREW said in a post.

“Her trademarks remain a potential conflict of interest as she continues to work on policy in the White House and meet with foreign leaders.”

Why did @IvankaTrump get a Chinese trademark for voting machines?

Where are these voting machines going to be used? The United States?

Why isn’t the media asking these important questions?

Ivanka shuttered her brand in 2018 as it faced boycotts and as retailers yanked her products from their shelves, but she has continued to seek trademarks and retains the copyrights and intellectual property from her brand. Yet Ivanka has said she is not sure when or if she will return to business.

CREW had  noted that the timing of three of Ivanka’s trademark approvals coincided with a day in 2017 when she had dinner with Chinese President Xi Jinping.

.@HouseDemocrats – You MUST get to the bottom of why #Ivanka "needs" a Chinese trademark for voting machines. Plans for a permanent #Trump dynasty by voting machines cheating? pic.twitter.com/D7gLMTLu0o

To be sure, if Obama’s daughter had received top security clearance and received trademarks from China to produce voting machines, Republicans would care about that.

Why do they not seem to care about the glaring ethical issues here even after witnessing the corruption of the 2016 presidential election?