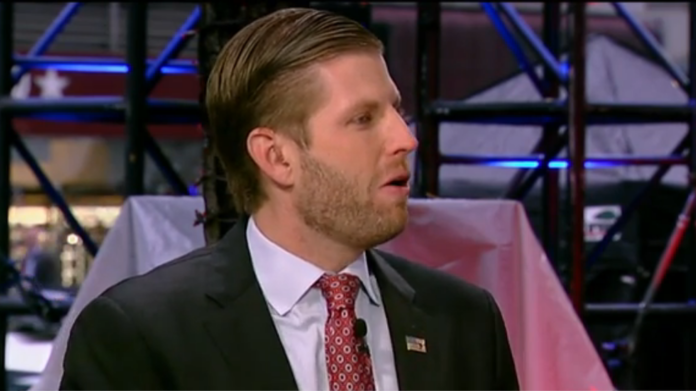 Now that it appears Congressional Republicans may be headed for a wipeout when all the votes are counted from today’s midterm election, surrogates for President Donald Trump are appearing on Fox News and whining about former President Obama daring to campaign for Democrats in the closing days of the 2018 race.

The president’s son, Eric, made a surprise appearance on “Fox & Friends” Tuesday morning, and he immediately went into full whine mode, claiming that Obama is daring to take credit for Daddy Trump’s economy:

“He (obama) does have a personal problem. He is taking credit for a lot of my father’s accomplishments.”

Eric then complained that Democrats are campaigning on style instead of specifics:

Of course, Eric failed to point to any of his father’s “true accomplishments,” probably because he has none other than a massive tax cut for the wealthiest Americans and a ballooning federal deficit thanks to that very same tax scam plan.

Before he left, Eric also tried to accuse Obama and Democrats of breaking the American healthcare system:

“It’s a system they broke. They’re running on health care — which is a system Obama broke.”

As for the claim that Obama is taking credit for Donald Trump’s accomplishments, consider what Betsey Stevenson, an economist at the University of Michigan, had to say in August:

“If you take a look at President Obama’s second term, he was adding 217,000 jobs. And since Trump assumed the presidency, he’s been adding 189,000 jobs per month. I’d say those are roughly around the same ballpark. But I don’t think Trump should be bragging that he’s somehow doing something that President Obama wasn’t doing.”

Here’s a record President Trump can certainly claim to hold: Telling more lies than any president in history. How’s that for an accomplishment, Eric?