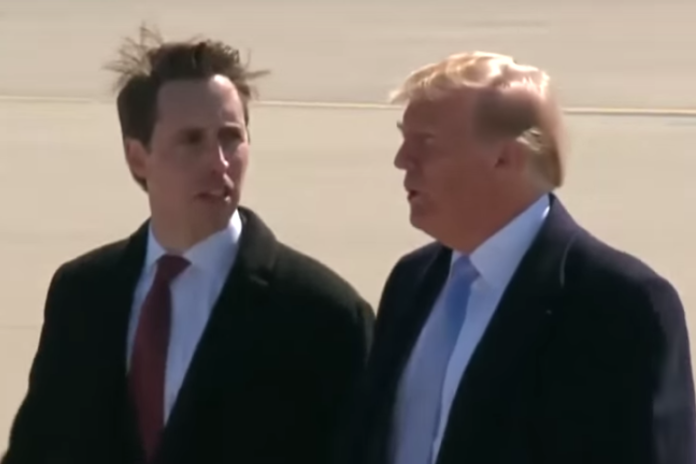 President Donald Trump made yet another desperate effort to smear Democrats on Tuesday morning when he accused them of starting a rumor about Missouri Republican Senate candidate Josh Hawley.

On Monday evening, Trump went to Missouri for a rally in support of Hawley, who is locked in a tight race against incumbent Senator Claire McCaskill (D-Mo.).

Republicans need to win the race to help them keep control of the Senate, but McCaskill is currently ahead by a razor thin margin in polling.

Hawley attended the rally. But Trump is claiming that Democrats have started a rumor saying that Hawley left the rally early.

There is a rumor, put out by the Democrats, that Josh Hawley of Missouri left the Arena last night early. It is Fake News. He met me at the plane when I arrived, spoke at the great Rally, & stayed to the very end. In fact, I said goodbye to him and left before he did. Deception!

The problem is that Trump actually heard this “rumor” from his favorite morning propaganda program “Fox & Friends.”

In fact, it was Brian Kilmeade who reported that Hawley did not stay for the entirety of Trump’s rally.

“Why Josh Hawley didn’t stay last night for the Missouri rally is beyond me,” Kilmeade said. “What could he have been doing that was so important?”

In short, Trump is blaming Democrats for a rumor that was actually started by Fox News.

This is how desperate Trump is to keep the Senate in Republican hands. Rather than simply correct his propaganda network, Trump simply used the commentary to attack Democrats and blame them for something they didn’t do. It’s a straight up lie to the American people, one of over 6,000 lies Trump has told so far since taking office.

Twitter users chimed in as usual to mock Trump, who similarly spread a rumor in order to attack Democrats in Indiana earlier this month.

Did this rumor start with you? I haven’t heard it and who cares?

It can’t be Fake News if it’s not even news. The only thing being made up is Trump’s tweet — there is no rumor about this in the news.

This tweet doesn’t make you look insecure at all.

Unfortunately, many Trump supporters believed him despite the fact that no one has reported on such a rumor. Only Fox News has said anything about Hawley allegedly leaving early, which he didn’t.