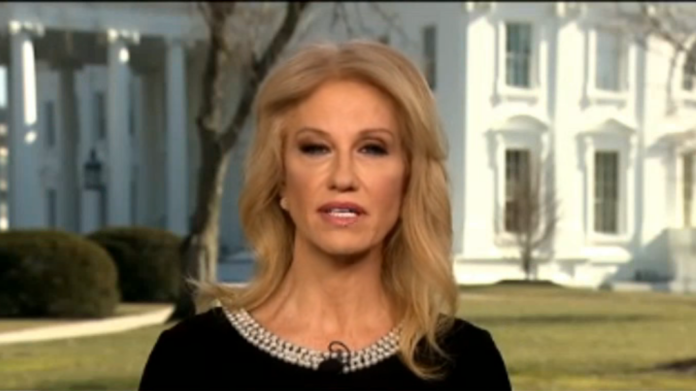 Kellyanne Conway, who serves as a counselor to President Donald Trump, said Monday that she cannot understand why the issue of abortion is about “women’s issues.”

During an appearance on the Fox News show “Outnumbered Overtime,” Conway went on an extended rant about a recent bill in Virginia which would have eased restrictions on late-term abortions in the state. Conway said that proved that embattled Democratic Governor Ralph Northam was in favor of “infanticide” before she declared that the “mainstream media” was “pretty much pro-abortion themselves.”

But host Harris Faulkner surprisingly came to the defense of journalists, telling Conway:

“You say most of the mainstream media being pro-abortion, I’m sure some of them would definitely take exception to that as they do their jobs objectively.”

“They’re going to say they’re pro-choice, but are they for this war against this?”

Once again, the Fox host pushed back:

“I completely understand that that is within the realm of politics perhaps. But you took a shot at the mainstream media, so I wanted to say that not everybody has political views that they would share on this to begin with, and would share them in common.”

That led Conway to make this absurd remark:

“I’m sorry, I have to say this, why do they call it ‘women’s issues’ then? Why do we always have to hear that such-and-such politician is bad or good on quote ‘women’s issues?’ Don’t they really mean abortion?

“Because I’ve been in politics for 30 years, and I’ve never not a single time heard the phrase ‘men’s issues,’ because people believe men voters can handle all the issues.”

Perhaps, Kellyanne, they call it “women’s issues” because no man has ever gotten pregnant and therefore has no right to tell a woman what she can or can’t do with her body.

The so-called “pro-life” community in this country is only pro-life until the child is born. Then they want to slash programs such as early childhood education, children’s nutrition , and other social welfare programs that are meant to help children meet their most basic needs of food, shelter, and education.

Not only is Ms. Conway being utterly disingenuous, she’s also a hypocrite, and that’s a bad combination.