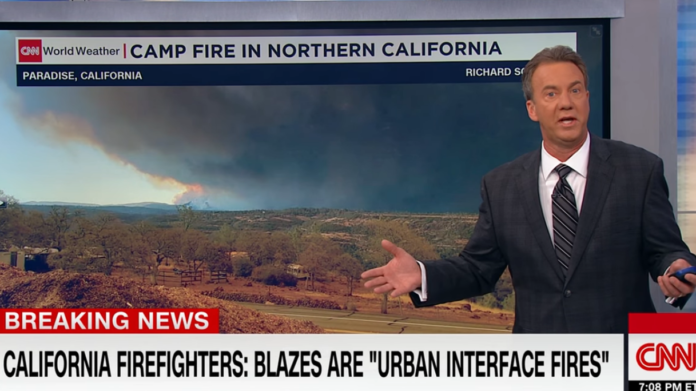 According to President Donald Trump, the horrific fires raging in California which have already claimed the lives of 25, burned some 83,000 acres of land, and led to over a quarter million people being evacuated, were caused by poor forest management.

Over the weekend, Trump fired off this threatening tweet:

But as CNN meteorologist Tom Sater pointed out Sunday, the president is just plain wrong:

“This has nothing to do with forest management. We’re not looking at dense forest here, especially down in Malibu.

“To say remedy now or we’ll take your funds, he’s already taken some of their funds.”

Sater then made an analogy which proved just how utterly clueless Trump is on the subject of wildfires:

“It’s like taking funds from the National Hurricane Center until you stop all these hurricanes. I mean, it’s the same notion.”

Perhaps most importantly, Sater continued, the president is completely overlooking the fact that people’s lives are being destroyed:

Trump, who is probably the most intellectually incurious president in American history, has no basis for his ridiculous assertions regarding the California fires. He gets the vast majority of his “information” from Fox News and merely regurgitates what he sees on the network. But as Tom Sater rightly noted, this is a matter of life and death. Threats and petulant fits won’t solve the problem or bring back the lives that have been lost.