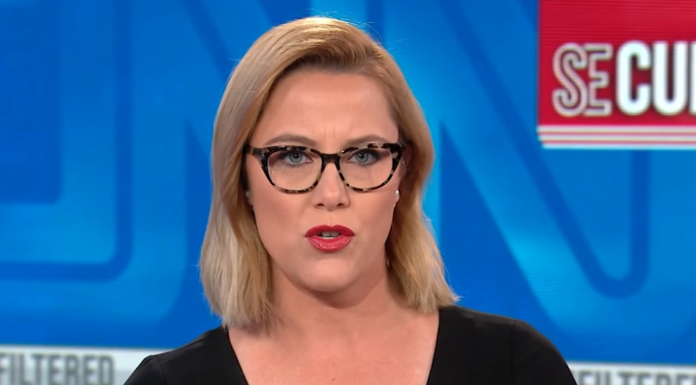 CNN host S.E. Cupp says she was sickened by President Donald Trump’s Fourth of July spectacle, which included a speech from the president, a display of military force, and historical inaccuracies, including his declaring that the American forces repelled British attackers at the airports hundreds of years before the airplane had even been invented.

“I’m usually one of those gals who likes to gear up for Independence Day. I like to put on my America tank top, throw a patriotic koozie on an adult beverage and post funny memes to social media like Ronald Reagan riding a velociraptor or Abe Lincoln on a grizzly bear.”

And that’s when Cupp accused Trump of using Independence Day 2019 for his own selfish purposes:

“But for some reason, this year I didn’t feel right doing any of that. Because more than ever, patriotism feels synonymous with Trump. Here’s the deal, Trump has hijacked patriotism — and I’m not here for it.”

The CNN host proceeded to spell out the many ways this president has repeatedly tried to undercut the most fundamental freedoms that have made the United States such a vibrant democratic nation since we first declared our independence in 1776:

“When the president of the United States turns our democratic ideals on their head, ideals like a free press and free and fair elections — undermining them just to make himself look better, making us doubt our very best assets, he doesn’t want you to love America, he wants you to love him.

“In Trump’s mind, he is America. Patriotism means celebrating him. Now, even if you’re a Trump supporter, that should be deeply disturbing! History has shown us a couple of guys like that, they don’t usually end up doing great things.”

Trump has indeed sought to undermine the freedoms this nation was built upon. He seems to delight in spitting on the very ideals first espoused by Thomas Jefferson in the Declaration of Independence and years later in the Constitution, which may well be the greatest document of self-governance and freedom ever composed.

Donald Trump is a threat to everything this country is supposed to be about: Liberty, tolerance, dissent, and the power of the individual. He must be defeated in 2020 if we value all of those principles and want to see them survive.