The United States Blues
Home News DNC Chair Tom Perez: Trump is ‘asleep at the wheel’ when it... 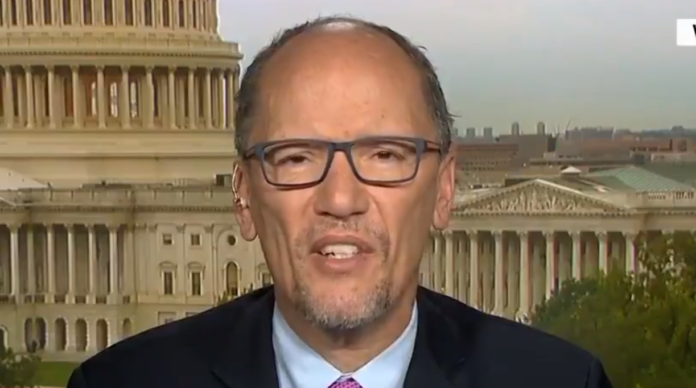 Democratic National Committee chairman Tom Perez said Thursday that a report this week suggesting President Donald Trump is doing nothing to protect the United States from cyber attacks with the 2020 election on the horizon proves that Trump has completely abandoned his pledge to protect the country from all enemies, foreign and domestic.

“Then you see the reporting in yesterday’s news about the former Homeland Security secretary, who expressed concerns about this happening again, and was told, ‘you can’t say that in front of Donald Trump.'”

The DNC chairman then noted the U.S. is clearly under attack on multiple fronts when it comes to cyber warfare:

“We are at war right now. It is a cyber war. Unfortunately, because our commander in chief is compromised, the federal government is asleep at the switch, and that is why the DNC and others at the Democratic Party ecosystem are working tirelessly to protect our data … we can’t expect help from this administration.”

All of this, Perez concluded, is why Trump must be defeated in 2020:

“If someone calls you and tells you, ‘I’m gonna rob a bank,’ your response should be, ‘I’m calling the authorities. When the Russians called Donald Trump and said, ‘I’ve got dirt on Hillary Clinton,’ they should have called the authorities. Instead they said, ‘tell us what you’ve got.’ That’s not right. And what we’re saying is, we need to restore the basic institutions of our democracy.”

Sadly, the single biggest threat to this country and our future currently resides in the White House, where he is steadily undermining the very foundations that have kept us strong and prosperous for over 200 years. He must be defeated in the next election or he may utterly destroy the greatest democracy in the history of the world.

“We are at war right now. It is a cyber war. Unfortunately, because our commander in chief is compromised, the federal government is asleep at the switch,” DNC Chairman @TomPerez says about President Trump and the potential for future election interference https://t.co/T3KTkzuYYj pic.twitter.com/WdtOvsYg2P