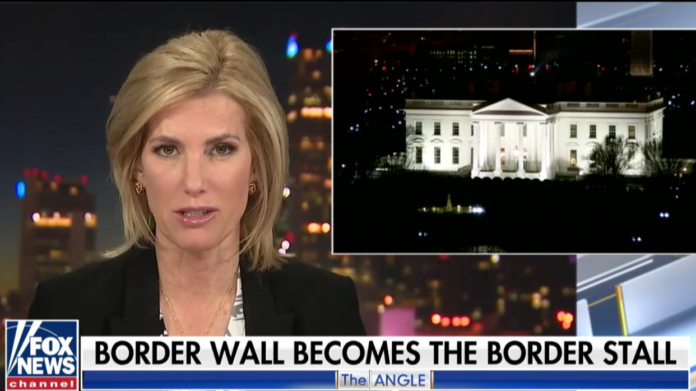 Fox News host Laura Ingraham is furious that President Donald Trump is considering signing the border security bill worked out by a bipartisan congressional committee, and she’s urging Trump to shut down the federal government a second time effective Friday at midnight.

So the president has his hand forced to sign a 1,159 page bill that we KNOW is filled with amnesty, PORK and wiggle room? Total SCAM! @realDonaldTrump wasn’t elected for this.

Ingraham then reminded Trump he had promised just last year that he would never sign such legislation again:

Remember, @realDonaldTrump signed that #omnibus last year, on promise he’d get his wall funding. They lied to him. Fool me once, shame on you. Fool me twice…

Trump hasn’t said whether or not he will accept the compromise bill which only gives him $1.3 billion for non-wall related construction of some barriers instead of the $5.7 billion he demanded before he shut the government down for 35 days, only to capitulate when air travel was threatened by the impasse in Washington.

Social media chided Ingraham for not caring about the millions who will get harmed if another shutdown takes place and mocked Trump’s deal making skills:

It’s almost like he’s a weak idiot and a shit deal maker.

When are you going to realize he is a terrible negotiator? Dude ran every business venture he touched into the ground. Maybe stop supporting his attempt to do the same to our country?

Congratulations: you’ve been played. Wise up.

That’s why he couldn’t sign it, you and Hannity had to be sent a copy first for your approval.