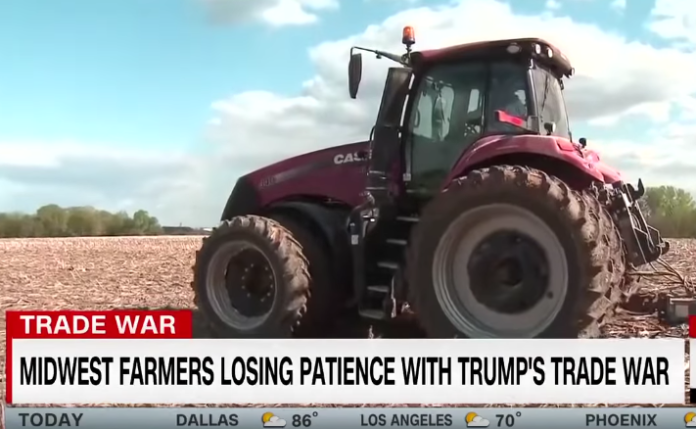 Farmers in Iowa regret voting for President Donald Trump as his trade war with China drags on and threatens their livelihoods.

CNN correspondent Martin Savage traveled to the state, which voted for Trump in 2016, to speak to the farmers who are being negatively impacted by the trade war, which has been ongoing for the last year and recently escalated when Trump slapped new tariffs on China and retaliatory tariffs were slapped against the United States.

“This is survival at this point,” Robert Ewoldt told CNN. “For a lot of operations, this is a survival thing.”

Ewoldt is a soybean farmer who still has much of his crop stored from last year after China chose not to purchase any more soybeans and other agricultural products from American farmers as a consequence of the trade dispute.

Faced with the loss of income, Ewoldt has been forced to drive a truck at night to make ends meet, only to work on the farm during the day.

It also must be exhausting considering the hard work farmers do starts before dawn.

When asked if he regrets voting for Trump, Ewoldt said “Yes.”

Asked if he voted for Trump in 2016, Angler did not hesitate to answer.

“I did — I’ll never vote for him again!” he exclaimed.

“He better hurry up and start producing a little bit,” he said. “Because so far, what I’m seeing, this negotiation has not panned out.”

Indeed, Trump keeps insisting that progress is being made, but that lie has been repeatedly exposed again and again as his allies basically tell farmers their suffering is okay because at least they aren’t dying.

Trump has even denied farmers critical disaster relief after mass flooding in the Midwest by railing against a House bill that would have provided $19 billion in relief. Trump opposed the bill because it also included disaster relief for Americans in other parts of the nation who have also been affected by natural disasters such as hurricanes.

House Republicans should not vote for the BAD DEMOCRAT Disaster Supplemental Bill which hurts our States, Farmers & Border Security. Up for vote tomorrow. We want to do much better than this. All sides keep working and send a good BILL for immediate signing!

Farmers are not the only ones being hurt by Trump’s trade war. As Savage would point out, farm equipment dealers and manufacturers also stand to pose profits because farmers can’t afford to purchase new equipment. Banks are going to lose money because farmers can’t pay on loans. And consumers are going to be hurt because tariffs are taxes that are passed on to consumers, not to mention the fact that our food supply will be impacted by the flooding that Trump refuses to provide relief for.

The ripple effect of Trump’s trade war is going to have an enormous impact beyond farmers, but as bankruptcies increase and profits are lost, those same farmers who voted for Trump are finally waking up to realize that he’s the one who is hurting them, not China.