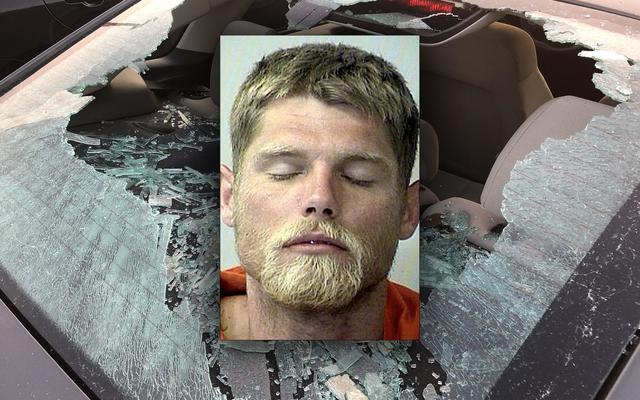 A Florida man vandalized 20 cars parked at a Holiday Inn on Okaloosa Island and then fell asleep on a nearby bench, according to police. When he was asked why he had allegedly committed the crime, Justin James Wilson, 30, reportedly remarked that President Donald Trump “owes me one trillion dollars.”

When deputies located Wilson nearby, he confessed to the officers and said, “Take me to jail. I did it because Donald Trump owes me one trillion dollars and these vehicles belong to the mafia.”

Okaloosa Island is located on the northwestern part of the Florida panhandle, east of Pensacola and slightly north of Panama City.

This is just the latest car smashing spree that’s taken place in the Sunshine State.

Five days ago, another Florida man allegedly vandalized and stole from a church in South Florida. Authorities in Doral are looking for a man caught on a surveillance camera who broke into the Lady of Guadalupe Church and stole about $500 from the offering boxes. He also did approximately caused about $800 in damage at the church.

And in February, a 60-year-old man got so frustrated at being unable to find his car in a crowded Pasco County parking lot that he allegedly vandalized 16 other vehicles:

However, the bulk of Albert F. Megnath’s damage was breaking, bending and removing windshield wipers from 16 cars, according to Patch.com.

Sheriff deputies said Megnath was argumentative and uncooperative when they confronted him. He was arrested and charged with criminal mischief and trespassing.

It remains unclear exactly why Wilson thought he was owed the enormous sum of $1 trillion or why he believed the cars he vandalized belonged to the mafia.

Police are continuing to investigate the incident.