The United States Blues
Home News Trump appears to claim he has new ‘secret weapons’ that are stronger... 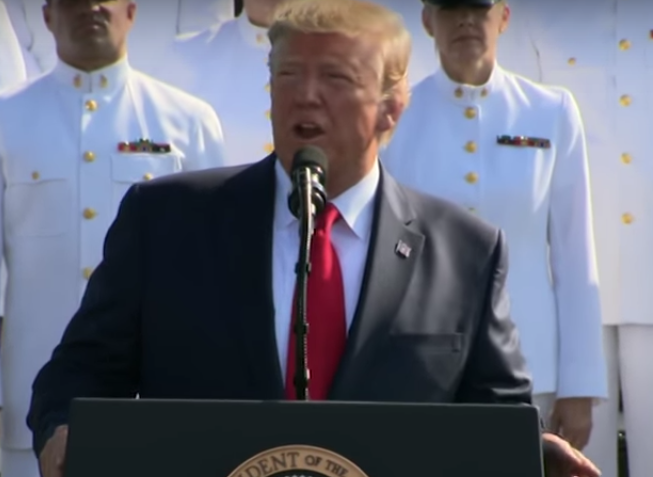 President Donald Trump threatened the Taliban during his remarks at the 9/11 remembrance ceremony at the Pentagon on Wednesday with a bizarre boast that humiliated himself and the nation.

Over the weekend, Trump revealed that he had been set to meet with Taliban leaders at Camp David this past Sunday, just three days before the 18th anniversary of the 9/11 attacks on our country in 2001.

The Taliban is responsible for having let Al-Qaeda be based in Afghanistan along with Osama bin Laden, who orchestrated the attacks that resulted in two wars, one of which we are still fighting today.

Efforts to pull our troops out of Afghanistan and end the war have been ongoing for several years now, but the Taliban would likely have to be involved in the negotiations. Trump’s timing for the meeting was terrible and insulting to the victims of the attacks and their families. But the Taliban has launched attacks against our troops in an effort to obtain a better bargaining position, which also was not going to fly.

So, Trump canceled the meeting, mostly because he wanted all the credit for any deal made and because the timing was embarrassing.

But if he had any notion of restarting negotiations for an American withdrawal, he tossed that out the window on Wednesday at the Pentagon, where he threatened the Taliban as 9/11 first responders, survivors and victim’s families looked on.

“If for any reason they come back to our country, we will go wherever they are and use power the likes of which the US has never used before, and I’m not even talking about nuclear power,” Trump bizarrely said. “They will have never seen anything like what will happen to them.”

Trump’s 9/11 speech: “If for any reason they come back to our country, we will go wherever they are & use power the likes of which the US has never used before — & I’m not even talking about nuclear power. They will have never seen anything like what will happen to them.” pic.twitter.com/Lde7rHYtfS

It appears Trump is claiming that the United States military has weapons even more powerful than nuclear bombs, which is just not possible. And it’s unclear what weapons he is talking about that we have not already used during nearly two decades of war.

Also, the United States has used nuclear bombs in warfare before, against the Japanese in 1945 to end World War II

Clearly, this is Trump bragging about an imaginary weapon that he will not be using anyway in order to make himself sound tough on a day that should have been about reflection and remembering those we lost 18 years ago.

Furthermore, by threatening the Taliban, Trump may have just put our troops in further danger Afghanistan and elsewhere in the Middle East as Taliban fighters could respond by stepping up their attacks.

Seriously, Trump really must not have been thinking when he made this threat.