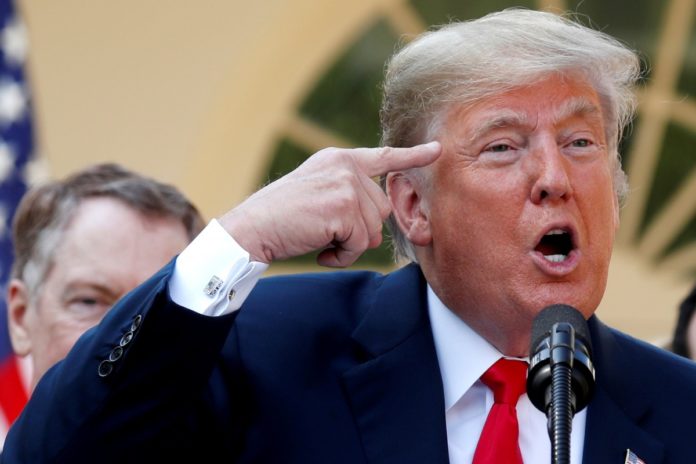 President Donald Trump ignored the fact that the 9/11 anniversary is today when he began his morning “executive time” by whining about Hillary Clinton and the polls on Twitter before telling a bunch of lies at the Pentagon during a remembrance ceremony.

Just days after Trump revealed he had been set to meet with the Taliban at Camp David as the 9/11 anniversary approached, Trump insulted the victims and their families again on Wednesday by name-calling his political opponents and complaining about the polls.

In a hypothetical poll, done by one of the worst pollsters of them all, the Amazon Washington Post/ABC, which predicted I would lose to Crooked Hillary by 15 points (how did that work out?), Sleepy Joe, Pocahontas and virtually all others would beat me in the General Election….

….This is a phony suppression poll, meant to build up their Democrat partners. I haven’t even started campaigning yet, and am constantly fighting Fake News like Russia, Russia, Russia. Look at North Carolina last night. Dan Bishop, down big in the Polls, WINS. Easier than 2016!

It should be pointed out that Bishop only won the race by two points in a deep red district that Republicans should have carried by a landslide. If anything, Republicans should see this “win” as a sign that they are headed for a very difficult election in 2020.

Trump then bragged about himself.

If it weren’t for the never ending Fake News about me, and with all that I have done (more than any other President in the first 2 1/2 years!), I would be leading the “Partners” of the LameStream Media by 20 points. Sorry, but true!

Eventually, Trump tweeted about 9/11 and promoted his upcoming remarks at the Pentagon, but those remarks were full of false claims about the terrorist attacks that brought down the World Trade Center Twin Towers.

Trump claimed that the media reported it was a boiler fire and that he knew better.

“I was sitting at home watching a major business television show early that morning,” Trump said. “Jack Welch, the legendary head of General Electric was about to be interviewed when all of a sudden they cut away. At first, there were different reports. It was a boiler fire. But I knew that boilers aren’t at the top of a building. It was a kitchen explosion in Windows on the World. Nobody really knew what happened.”

That’s not true at all. There were no such reports of a boiler fire and news programs were busy trying to figure out why a plane had crashed into the building.

Trump also claimed that he knew it was terrorism as soon as the second plane hit the building.

As usual, Trump can’t talk about 9/11 without lying. His most recent lie prior to the ones told today is that he personally visited Ground Zero to help the first responders. He did no such thing and nobody actually remembers seeing Trump there.

Trump’s behavior and lies are insulting to the memories of those we lost that day and to the living friends and family members who continue to attend remembrance ceremonies in their honor. He should be ashamed.