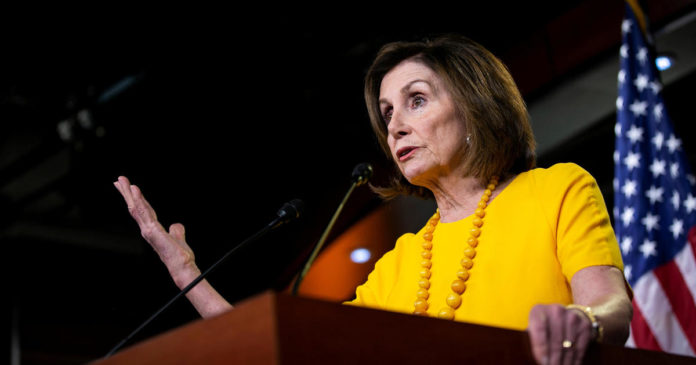 Now that Congress has returned from its summer recess, the issue of gun violence and gun control are at the forefront of the legislative agenda, but it appears that Senate Majority Leader Mitch McConnell (R-KY) isn’t the least bit interested in cooperating with House Speaker Nancy Pelosi on any legislation.

On Tuesday, McConnell indicated that he won’t advance any bills in the Senate to expand background checks or other measures unless President Donald Trump promises to sign them, telling reporters:

“What I’ve said consistently is, let’s see if we can actually make a law here,” McConnell said. The White House is “working on coming up with a proposal that the president will sign. Until that happens, all of this is theatrics.”

That led a reporter to ask Pelosi if she should have called the House back into session during the August break to keep the national focus on gun violence. The Speaker quickly reminded the reporter that the House cannot pass anything if McConnell continues to drag his feet:

“Absolutely not. We passed our bill in February. Don’t ask me what we haven’t done — we have done it. And if you are annoyed with my impatience, it’s because people are dying, (and) Sen. McConnell hasn’t acted. Why don’t you go ask him if he has any regrets for all the people who died because he hasn’t?”

Well damn. Nancy just dragged the FUCK out of that reporter. ? Are there any follicles left on her scalp? pic.twitter.com/Zh6ayrzxij

Senators Chris Murphy (D-CT) and Joe Manchin (D-WV) have been meeting with the White House to discuss possible legislation that might be able to pass the upper chamber and also be acceptable to Trump, who has to try and balance any new laws against what the National Rifle Association (NRA) will accept. Murphy and Manchin have indicated that any bill would have to include expanded background checks for Democrats to support it. Republicans are said to be less than enthused about such a stipulation.

The San Francisco Chronicle reports that a Democratic bill is in the works by the House:

“The bill, by Democratic Rep. Mike Thompson of St. Helena, would subject weapons purchasers in private transactions — such as gun shows — to the same background checks that apply to buyers at gun stores. Such checks include searches for criminal records that may bar someone from possessing a gun.”

Other Democrats also noted that McConnell is the reason nothing is being done.

“It would self-defeating for us to come back and say there’s more we could have done when we passed background checks in the first 100 days. I don’t want to give moral equivalence to McConnell. They should pass background checks.”