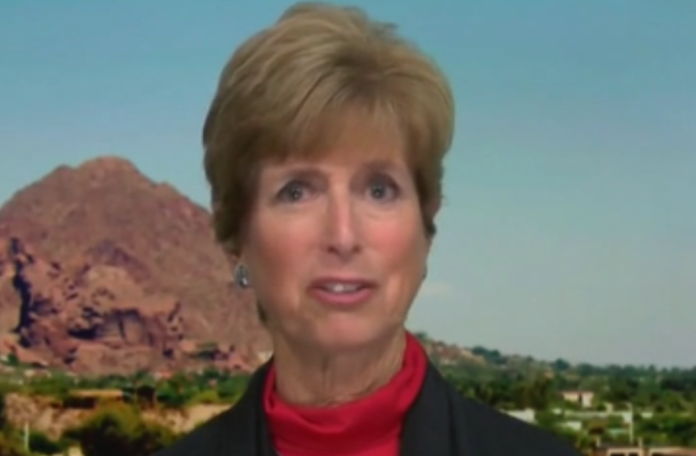 Former Republican New Jersey Governor Christine Todd Whitman took aim at President Donald Trump on Monday evening for once again humiliating the United States in response to the revelation that he apparently begged Japanese Prime Minister Shinzo Abe to nominate him for the Nobel Peace Prize.

Trump has been desperately seeking the Nobel Peace Prize ever since he attended the Singapore summit with North Korean dictator Kim Jong Un, claiming that he has earned it because North Korea has stopped missile launches and nuclear testing.

However, North Korea has been duping Trump since long before the summit by developing missile and nuclear facilities in secret while insisting they will denuclearize. Not only has North Korea admitted this by demanding the removal of all U.S. forces in Southeast Asia, but even Trump’s own intelligence chiefs have testified that North Korea has no intentions of giving up their nuclear weapons.

So, rather than reduce the threat of nuclear war, Trump is actually helping North Korea become a greater threat to our allies and our own national security.

In short, in no way does he deserve a Nobel Peace Prize. In fact, he doesn’t deserve a nomination either.

But Trump bragged about being nominated for a Nobel Peace Prize on Friday by saying he received a five-page letter from Abe.

The problem is that it looks like Trump or someone in his administration asked Abe to nominate him.

At a meeting of the lower house of Japan’s parliament on Monday, Abe said he wouldn’t comment on the report because Peace Prize nominations are secret for 50 years. But he did say: “I’m not saying it’s not true.”

It’s just sad and embarrassing that Trump had to stoop to such measures in a desperate bid for an award he doesn’t deserve just because former President Barack Obama received one during his presidency.

“When I was in the White House I was not aware of President Obama’s team asking somebody to nominate him for the Nobel Peace Prize,” Chemali said. “It certainly doesn’t surprise me for President Trump because, in his world, I think he thinks he deserves it. And I think that he wants an award that was also bestowed on President Obama.”

Whitman agreed and proceeded to rip Trump a new one for embarrassing himself and the country out of jealousy of Obama.

“He has got to do everything better and bigger than anybody before him; particularly Barack Obama,” Whitman said. “What we see in the way the administration is approaching policies. Anything that Obama touched, had anything to do with — we’re going to do away with it. He should have the common sense to be embarrassed that this has gotten out. He should feel humiliated, as a nation — it’s sort of embarrassing when the president of the United States asks another world leader to nominate them.”

Whitman went on to point out that nominations are supposed to be kept secret for 50 years, and that bragging about Abe nominating him puts the Japanese leader in a terrible political position because his political opponents can use it against him, as can China and South Korea because he’ll be seen “as a tool of the United States.”