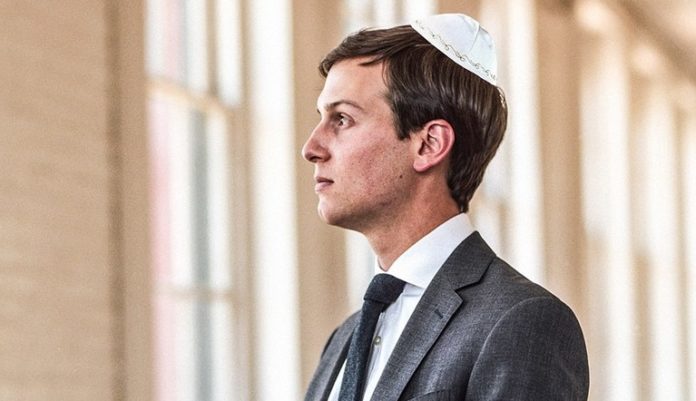 Duke’s posting depicts Kushner as a puppet master, holding the president up by his underwear, along with the hashtag #FireKushner:

Earlier this month, Duke also referred to Kushner as a “Jewish Zionist Supremacist” and the “Anti-Christ.”

Makes Sense to Me! Ending Foreign Zionist Wars and Putting America First! But I guess that means Trump will have to first remove the Jewish Zionist Supremacist Jared Kushner from the White House! pic.twitter.com/B7YqUnA1kz

Trump announces “One Year Warning” to Mexico! Mr. Prez, you can forget about your re-election. With vile Zionist cucking, and your total turnaround on every critical issue led by Anti-Christ Kushner…Does the Mossad and its Epstein Island Lolita Express have something on you? pic.twitter.com/h6uLlQqYQ8

While Duke likes to pretend he’s a “Christian,” his hateful tweets and history of racism, xenophobia, and anti-Semitism are a clear indication that he hasn’t bothered to actually read the Bible he claims to swear allegiance to.

Duke is symptomatic of a larger problem for Republicans: Namely, they embrace the anti-immigrant rhetoric espoused by Trump, yet they also apply their noxious beliefs to anyone who isn’t a white Anglo-Saxon protestant. The GOP claims they don’t want anything to do with white supremacists or white nationalists like Duke and Richard Spencer, but they actively court voters who are perfectly happy to see migrant children placed in internment camps for months on end.

Donald Trump and David Duke deserve each other. Both of them are disgusting, vile, and unrepentant. And both of them are perfect examples of why the Republican Party is on the verge of becoming irrelevant.